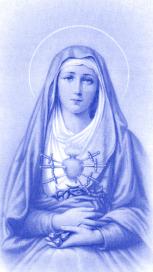 Our Lady of Sorrows

My daughter, the abandonment of dear ones is one of the greatest sorrows for a human heart in the stormy hours of life; especially for My Son, who had Loved them so much and done so much Good to them, and who was in the Act of Giving His Life for the very ones who had just abandoned Him in the extreme hours of His Life— even more, they had run away. What Sorrow! What Sorrow! And I, in seeing Him Agonize and Sweat Blood, Agonized together with Him and sustained Him in My Maternal arms. I was Inseparable from My Son; His Pains were reflected in My Heart, liquefied by Sorrow and by Love, and I felt them more than if they were  My own. So I followed Him the whole night; there was not one Pain or accusation they gave Him, which did not resound in My Heart. But, at the dawn of the morning, unable to endure any longer, accompanied by the disciple John, by Magdalene and other pious women, I wanted to follow Him step by step, also corporally, from one tribunal to another.