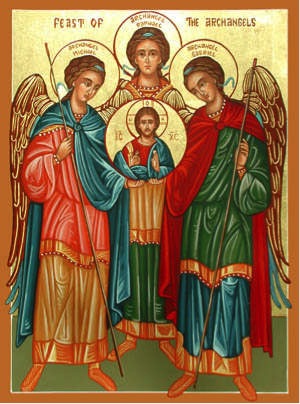 Prayer of the Servant of God Luisa Piccarreta, the Little Daughter of the Divine Will at the beginning of Volume One in “The Book of Heaven”:

Most Holy Virgin, lovable Mother, come to my aid, obtain for me from your sweet Jesus and mine, grace and strength in order to do this obedience (write the Volumes). Saint Joseph, my dear protector, assist me in this circumstance of mine. Archangel Saint Michael, defend me from the infernal enemy, who puts so many obstacles in my mind to make me fail this obedience. Archangel Saint Rafael and you, my guardian Angel, come to assist me and accompany me, and to direct my hand, that I may write nothing but the truth.
May everything be for the honor and glory of God

The Sacred Scriptures have revealed the proper names of only three Angels, all of whom belong to the Choir of the Archangels. The names are well known to all, namely: Michael, Gabriel, Raphael. Ancient apocryphal literature of the Old Testament contains several other names of Archangels in addition to the three just mentioned. Like the sources themselves, these other names are spurious. Names like Uriel, Raguel, Sariel, and Jeremiel are not found in the canonical books of Sacred Scripture, but in the apocryphal book of Enoch, fourth book of Esdras, and in rabbinical literature. The Church does not permit proper names of Angels that are not found in the canonical books of the Bible. All such names that were taken from apocryphal writings were rejected under Pope Zachary, in 745. There must have been danger of serious abuses in this regard during that century.

The Church honors the archangels, invokes their intercession and relies on their assistance in the spiritual warfare we daily face. In Hebrew, “Michael” means “Who is like God?” Saint Michael is mentioned four times in Scripture: Daniel 10 and 12, in Jude and in Revelation. Scripture reveals to us that Saint Michael is known as the “Prince of the Heavenly Host,” hence, the leader of all angels. It is to the Prince of the Heavenly that we owe a debt of gratitude for casting down to Hell Lucifer and the evil spirits; he is invoked for protection against Satan and all evil.

Sacred Tradition teaches that there are four offices connected to Saint Michael:

We know the archangel from his announcement of the dawn of salvation to Mary: “I am Gabriel, who stand before God” (Luke 1:19). What is crucial to remember about Gabriel are his two announcements in the New Testament: the birth of John the Baptist to his father Zachary and of the Incarnation, the Word made flesh in Mary. Saint Gabriel, whose name means “God’s strength,” is also mentioned four times in Scripture.  Again, sacred Tradition tells us that it is Saint Gabriel who appeared to Saint Joseph and to the shepherds. At the beginning of the Passion it was Gabriel who “strengthens” Jesus in the his agony of the garden.

“I am the angel Raphael, one of the seven, who stand before the Lord” (Tobit 12:15) Saint Raphael, whose name means “God has healed” because of his healing of Tobias’ blindness in the Book of Tobit. This book in the Old Testament is the only book in which Raphael is mentioned. He is the archangel of healing and acts of mercy. Tradition tells us that Saint Raphael is the angel in John 5:1-4 who descended upon the pond and bestowed healing powers upon it so that the first to enter it after it moved would be healed of whatever infirmity he was suffering.

Those familiar with what is called the “old Mass” will remember praying the Prayer to Saint Michael at the conclusion of Mass. In 1899, after a vision of evil, Pope Leo XIII wanted to protect the Church and instructed that his prayer be prayed by all, especially the priest. I can’t recommend the prayer enough to you when making your thanksgiving following Mass or the Divine Office. Plus, I would recommend that you pray the Prayer to Saint Michael prior to going to bed. Saints Michael, Gabriel and Raphael, pray for us.