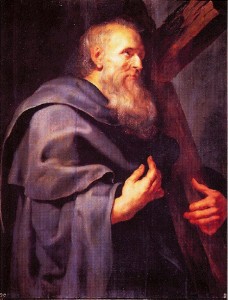 Tomb of St. Philip and St. James the Minor

St. Philip, like Sts. Peter and Andrew, was of Bethesda in Galilee.  He died at Hierapolis in Phrygia on the cross, like them.  It is he whom Jesus addresses at the multiplication of the loaves, and it is through him as intermediary that the Gentiles seek to address the Savior.  To him also we owe what the Master said in His discourse at the Last Supper:  “Philip, who sees Me, sees My Father”.  To go to Christ is to go to God, for the works of the Messiah have proved His Divinity.  It is in virtue of His Divine nature that He rose again, and the two apostles whose Feast coincides with the Easter Feasts, by their martyrdom, confirm the truth of which they have been witnesses.

St. James, called the Minor, was of Cana in Galilee.  A cousin of our Lord, he had for brother the apostle Jude, and was made, by Peter, bishop of Jerusalem.  It is of him that St. Paul speaks when he says:  “I did not see any apostle except James the brother of the Lord.”  Called upon by the High Priest to deny Jesus, he was thrown down from the terrace of the Temple and his head was broken by the blow of a club.

Following the example of the Holy Apostles Philip and James, let us confess by a generous life the Divinity of the Risen Christ.

Sts. Philip and James the less – Apostles
– St. Philip – Symbol: Latin cross, Saint Philip is pictured carrying the Cross of Christ, which was the theme of his preaching. His preaching took him to Phrygia, where he suffered martyrdom.
– St. James the Less – the brother of Saint Jude and a cousin of Jesus. While serving as Jerusalem’s first Bishop, he was arrested by the Jews and killed. Symbol: fuller’s club, after being cast from the Temple roof Saint James was beaten to death with such a club.