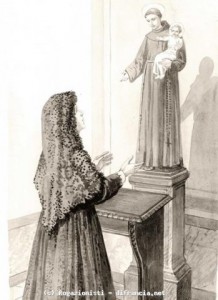 A Sister from one of St. Di Francia’s religious Institutions
in Prayer before Statue of St. Anthony of Padua

St. Anthony of Padua is a Doctor of the Church known for his miracles and being one of the greatest preachers of all times.  He is known as the “Hammer of the Heretics,” “Living Ark of the Covenant,” and “Wonder Worker.”  He is Patron of the Poor.  In art he is depicted holding the Christ Child.  He is widely invoked for the return of lost articles.

St. Anthony of Padua also assisted St. Annibale Di Francia in his life’s mission:   “Even though there was no center of those devoted to St. Anthony in those days, aid for the orphans and the poor were increasing, owing to the devotion to St. Anthony’s bread, to the press, to the alms boxes, and to the devotion to the saint in the church of the Annunciation.  Hence the padre felt inspired to make St. Anthony the special patron of this orphanages.  Our founder was urged to do so by his helper Fr. Bernardo of the Friars Minor.” (Rogationists)

It seems no accident that this great Saint was placed in charge of and protection of St. Annibale Di Francia’s Orphanages and Religious Institutions.  Luisa also lived 10 years in the Orphanage of St. Anthony in Corato. These two saints are also important to Luisa’s cause because of the necessity of St. Di Francia as “an anticipator and precursor of the modern pastoral care of vocations” (St. Pope John Paul II) and St. Anthony’s help to return man’s greatest loss—that of the Holy Divine Will.