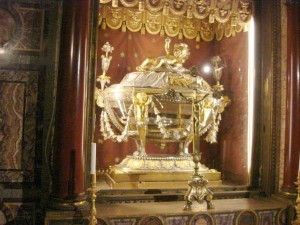 The Confessio believed to contain relics of the Crib of Bethlehem
St. Mary Major Basilica

The most pleasing and consoling words for the sweet Mama: ‘Dominus Tecum’.

This morning, after I struggled very much, the Queen Mother came with the Baby in Her arms, and She gave Him to me, telling me to keep Him courted with continuous acts of love. I did as much as I could, and while I was doing this, Jesus told me: “My beloved, the most pleasing and most consoling words for my Mother are: ‘Dominus Tecum’ [‘The Lord is with Thee’]. In fact, as soon as they were pronounced by the Archangel, She felt the whole of the Divine Being being communicated to Her, and therefore She felt invested with Divine Power, in such a way that, in the face of the Divine Power, Her own dissolved; and so my Mother remained with the Divine Power in Her hands.”

The Patriarchal Basilica of St. Mary Major reigns as an authentic jewel in the crown of Roman churches. Its beautiful treasures are of inestimable value, and represent the Church’s role as the cradle of Christian artistic civilization in Rome. For nearly sixteen centuries, St. Mary Major has held its position as a Marian shrine par excellence and has been a magnet for pilgrims from all over the world who have come to the Eternal City to experience the beauty, grandeur and holiness of the basilica.

Among the Patriarchal Basilicas of Rome, St. Mary Major is the only one to have kept its original structure, though it has been enhanced over the course of years. Special details within the church render it unique including the fifth century mosaics of the central nave, the triumphal arch dating back to the pontificate of Pope Sixtus III (432-440) and the apsidal mosaic executed by the Franciscan friar Jacopo Torriti at the order of Pope Nicholas IV (1288-1292). Other gems of the church include the Cosmatesque pavement donated by the Roman nobleman Scoto Paparone and his son in 1288, Arnolfo di Cambio’s Nativity scene from the thirteenth century and the coffered ceiling in gilt wood designed by Giuliano Sangallo in 1450. The numerous chapels, from the most ornate to the most humble, constructed by popes, cardinals and pious confraternities, the high altar begun by Ferdinando Fuga and later enriched by the genius of Valadier, the Baptistery and finally the relic of the Holy Crib complete the array of splendors contained within these walls. Every column, painting, sculpture and ornament of this basilica resonates with history and pious sentiment.

From the devout pilgrim absorbed in prayer to the studious art-lover, every visitor to St. Mary Major finds both spiritual and visual fulfillment in this holy place. A visit to the Liberian basilica, as it is also called in honor of Pope Liberius, enriches both the mind and soul. Indeed, it is not uncommon to see visitors rapt in admiration before the spellbinding beauty of the artwork nor, at the same time, to observe the devotion of all those engrossed in prayer in search of comfort and assistance before the image of Mary, who is venerated here under the beloved title of Salus Populi Romani.

Every August 5th, a solemn celebration recalls the Miracle of the Snows. Before the amazed eyes of the congregation, a cascade of white petals descends from the coffered ceiling, blanketing the hypogeum. From the very beginning of his pontificate, Pope (Now Saint) John Paul II requested that an oil lamp burn day and night under the icon of the Salus Populi Romani, as witness to his great devotion to the Madonna.

This same Pope, on the eighth of December 2001, inaugurated another precious jewel of the basilica – the museum, where a modern structure would house ancient masterpieces offering visitors a unique perspective of the history of the Basilica.

The numerous treasures contained in the museum render St. Mary Major a place where art and spirituality combine in a perfect union, offering visitors a unique experience in contemplating the great works of man inspired by God.