Calendar for the Traditional Roman Rite 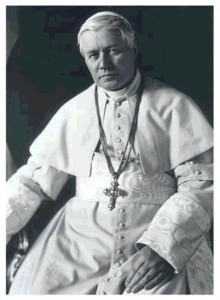 Motto “renew all things in Christ”

An 11 year period where Luisa “The Divine Mirror”
completed the very important book “The Hours of the Passion”,
which was soon followed by WWI.

“Several witnesses relate that one day Father Annibale came to the house of Luisa more content than ever, and said that
he had brought this book to the Holy Father, Saint Pious X, who had received him several times in private audience.

Father Annibale was reading him one of the Hours (that of the Crucifixion), when the Pope interrupted, saying:

“Not this way, Father, but kneeling one must read.
It is Jesus Christ that is speaking.”

Finally, Father Annibale, as Censor of the writings, obtained the Imprimatur from His Excellency the Archbishop of
Trani for the volumes written by Luisa (at that time there were already nineteen)