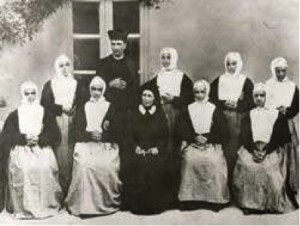 In the beginning, Saint Annibal entrusted the girls’ orphanage to a distinguished widow who had been converted to a life of piety through one of his sermons: Laura Jensen Bucca was a genuine help to him for several years, but then she resigned. The priest turned to various religious communities, only in vain. So he decided to found his own congregation of nuns whom he called Daughters of Divine Zeal, patterned after the inspiration of the Rogate – the expression of the zeal burning in the Sacred Heart of Jesus for the glory of the Father and the salvation of souls.

The budding community was not without its headaches: tribulation goes hand in hand with all the works of God. Not only that, it is the bright badge of divine favor. In the light of a schism which occurred, the Institute was suppressed by Church authority. Thanks to the offices of a venerable Friar Minor, Fr. Bernard of Portosalvo, a one-year stay on the decree was given to the Fr. Annibal. The Institute was put on trial. During that year, he had as a cooperator for his work none other than Melanie Calvat, the famous young shepherdess to whom the Mother of God appeared on the mountain of La-Salette.

Melanie remained at the Institute for one year, from September 1897 to September 1898 – a year which, in the words of Saint Annibal, was a year of blessing. The trial period was weathered successfully, having a healthy and vigorous effect on the community, and the women’s congregation was put on a safe footing.

Melanie died at the age of 72, alone and unattended, on December 14 A.D. 1904, at Altamura, near Bari, Italy. She is buried beneath a marble column with a bas-relief depiction of Our Lady welcoming her into heaven. In spite of her unapproved writings, Melanie was always faithful to her original account of the apparition and message of La Salette. She demonstrated this at the Shrine of La Salette during her last visit there September 8-19 A.D. 1902.