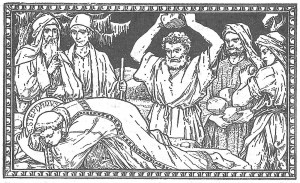 That St. Stephen was a Jew is unquestionable, himself owning that relation in his apology to the people. But whether he was of Hebrew extraction and descended of the stock of Abraham, or whether he was of foreign parents incorporated and brought into that nation by the gate of proselytism, is uncertain. The name Stephen, which signifies a crown, is evidently Greek; but the priest Lucian, in the history of the discovery of his relics, and Basil of Seleucia, inform us, that the name Cheliel, which in modern Hebrew signifies a crown, was engraved on his tomb at Caphragamala. It is generally allowed that he was one of the seventy-two disciples of our Lord; for immediately after the descent of the Holy Ghost, we find him perfectly instructed in the law of the gospel, endowed with extraordinary measures, both of the interior and exterior gifts of that divine Spirit which was but lately shed upon the church, and incomparably furnished with miraculous powers. The church of Christ then increased daily, and was illustrious for the spirit and practice of all virtues, but especially for charity. The faithful lived and loved one another as brethren, and were of one heart and one soul.