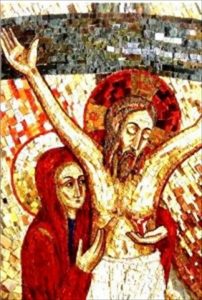 “But when they came to Jesus and saw that he was already dead, they did not break his legs. Instead, one of the soldiers pierced his side with a spear, and at once blood and water came out”.

It’s around three in the afternoon, from moon, the sky has turned into darkness. Now it is finished. Jesus’ bones are out of joint, it is possible to count them one by one. His heart is like wax; it is melted within His breast. He is poured out like water. His  strength is dried up like a potsherd. His tongue sticks to his  jaws, and He ,with a soft voice, which is sufficient so that the soldiers can hear Him, whispers: “I thirst!”.

Those men still do not understand. They put a sponge full of the sour wine on a hyssop branch and held it to His mouth. That bad wine, which is like lifeless blood, is the only thing that a man can offer Him. The sour wine is the symbol of our life that is consumed by sin and ripped by the primordial wound. It is like wine that has lost its color, taste and aroma. Jesus also drinks that sour wine. He takes everything that  a man gives Him.

On July 4 1910, Jesus explained to Luisa that in a special way He wanted to suffer the agony in the Garden, in order to help all of the dying to die well and  the agony on the Cross was for help at the last moment, at the very last breath.

They are both agonies, but one is different from the other: the agony in the Garden, full of sadness, of fears, of anxieties, of frights; the agony on the Cross, full of peace, of imperturbable calm. And if Jesus cried out ‘I thirst!’, it was the insatiable thirst that all might breathe their last in His last breath; and in seeing that many would go out of His last breath, out of grief He cried out ‘Sitio!’ [‘I thirst!’], and this ‘sitio’ still continues to cry out to all and to each one like a bell at the door of each heart: ‘I thirst for you, oh soul! O please, never go out of Me, but enter into Me and breathe your last in Me!’

Jesus told Luisa in another passage of November 9, 1906, that one who meditates continuously on His Passion and feels sorrow for it and compassion for Him, pleases Him so much that He feel as though comforted for all that He suffered in the course of His Passion; and by always meditating on it, the soul arrives at preparing a continuous food. In this food there are many different spices and flavors, which form different effects. So, if in the course of His Passion they gave Him ropes and chains to tie Him, the soul releases Him and gives Him freedom.

In the Passion they despised Him, spat on Him, and dishonored Him; on the contrary one who meditates on His Passion appreciates Him, cleans Him of that spittle, and honors Him. They stripped Him and scourged Him, the soul who meditates on His passion heals Him and clothes Him. They crowned Him with thorns, mocking Him as king, embittered His mouth with bile, and crucified Him; while the soul, meditating on all His pains, crowns Him with glory and honors Him as her king, fills His mouth with sweetness, giving Him the most delicious food, which is the memory of His own works; and unnailing Him from the Cross, she makes Him rise again in her heart. And every time she does so, He gives her a new life of grace as recompense. She is His food, and He becomes her continuous food.

After receiving the sour wine, Jesus, with His few strengths, said the last words: “It is finished”.  The sun has turned into darkness and the moon into blood,

All creation returns to feel lonely as before the birth of man. Darkness tries to hide from  creation what man has just accomplished. It does not want creation to know that it no longer has reason to rejoice. The end of all things seems that has arrived. Jesus bends his head and gives up His spirit.

God is dead and with Him also our humanity. The earth is again without form and void, and darkness is over the abyss of nothingness created again by us. Everything has turned back as before God said: “Fiat lux!”. Man died for his sin. No bush of the field is in the land, the grass does not spring anymore. A source of blood is gushing from the heaven and is irrigating the whole ground. God is dead for love. Jesus bows His head and blows His spirit into the nostrils of that land which is mixed with His blood. For love sin is defeated and along with it death too. Man becomes again a living being!

The time of sunset is approaching. Saturday preceding the Passover is the new day that is to come . The chief priests don’t want the bodies of the criminals to be hung from the cross: these are the bodies of people cursed by God! They break the bones of the two thieves who are  with Him to accelerate the course of their death. Jesus is already dead, there is no need to harm Him again.

A centurion, to make sure He is dead, prepares to strike Him with the spear. He grasps it, he pierced His side, he moves His arm to load the shot. That soldier was about to open His heart. No man has ever been able to do this.

To enter the heart of Jesus, to know His mysteries is man’s most sincere and noble desire. Jesus allows us to do this from the beginning, but since man has ceased to trust Him and wanted to reach on his own that knowledge, everything is ruined. His pride has opened within him a deep gorge of dissatisfaction. The more man has the more he is afraid of losing. The more he knows and the more he longs to dominate the world around him. He arranges his life in order to exorcise death, but the more he tries to do this and the more the thought of it haunts him.

All the sin of man is now concentrated in the blade of the spear that is going to penetrate His chest. The primordial hope to be like Him and to know His thoughts is finding its satisfaction in that spear. What does he hope to find? At one time, the result of that gesture were suffering and death. What will happen now?

Beneath the cross there is not only the centurion. There are not only the hypocritical Pharisees, the unscrupulous soldiers and the people of Israel who mocks Him. Beneath the cross there is a new people that without that spear has already learned to understand what His heart conceals. Simon of Cyrene learned it through His eyes and savored the peace that comes from carrying the cross with Jesus. Mary, His mother, understood this, day after day, walking with her Son along her earthly existence. His heart is so full of love and suffering that there is no human being who can get close to His feelings more than She does.

Beneath the cross there is also John, who trusted Jesus’ love and learned to love as Jesus loves, giving his own life for his friends. Under the cross there are all the people that Jesus loved throughout His life, and that they felt loved by Him, recognizing in His love, the love of the Father. These are different people who belong to different cultures and religions, to different ages and  classes of population, they have nothing in common except His same love.

And now they are there and will remain there. They are His friends, His brothers. They are His Church. Also Peter and the other apostles of whom there is no trace will soon return. After His death also Nicodemus and Joseph of Arimathea, who are teachers of the Law and powerful men, will find the courage to follow Him. They will lay His body in a tomb and anoint it with thirty pounds of oil, as for the kings, because Jesus is king even if the world does not understand this, but His friends understand this and as for the Kings, they serve Him faithfully.

That spear cuts through the air and comes close to His chest. The centurion took the place of the first woman and the first man. The curiosity of that soldier has taken the place of human greed to give satisfaction to both. The deep wound that inhabits our being is going to be filled by what they always yearn.

The spear pierces the skin and the entire blade penetrates His chest. His heart is more and more close.

The blade sinks into His side up to touch the layers of the source of a new life. The peak of our sin comes to the bottom of His heart. Man came there where he always wanted to go. Now his desire to know good and evil is now a reality, he can really be like God. All evil  caused by men comes to light. All the good is going to spring from that pierced side.

Sin  broke the rock of time and space. A gush of water and blood comes out of the depths of the eternal mysteries. A new source of life has been opened in history to gush forever: it is the river of His Mercy.

The blood that He had saved as a last gift of love, pours itself  on the body of the centurion and with him also on the body of every man that has been replaced by him. We are flooded by His Mercy.

So this is what hides in the heart of Jesus: an infinite love for us. So, to be like Him is to love as He loves: to the end, till the last drop of blood in our body.

Love makes us divine. But this is a love that is until the end, till the last drop of blood. After all, His enemies had already understood that. They, too, continued to live by giving their lives for love. This is the meaning of everything. This is what makes us children of God.

Man has now recovered his lost image and rediscovers himself as child of God who is loved by Him. The wound that inhabits the human heart has regained its original state: it has again become thirsty of love. The wound in the side of Jesus attracts our wound. Jesus shouts from His heart to us: “If anyone is thirsty come to me and the one who trust me drink.” We never will turn away from His heart and will drink forever at the source of His Mercy.

O Adorable Heart, pierced for us,

the expectations of the poor, the tears of the suffering,

the hopes of the peoples,

so that all mankind

may meet in Your Kingdom of Love,