Art, like philosophy, begins with wonder at what is, and no material thing exists without form. The great Catholic philosopher Étienne Gilson says that “the word ‘form’ designates the essential nature of a thing or, still more precisely, that nature itself considered as determining the thing in its species and, by the same token, in its figure and in its shape.” Form determines the essence or nature of a thing; and at the same time it is through its form that a thing receives existence, because existence is always that of some actually existing thing, and a thing is what it is by virtue of its form. So form causes a thing to be, to be what it is, and to be beautiful (formosus, “full of form”) for beauty is the splendor of being. Saint Thomas Aquinas calls the splendor of the fullness of form claritas or radiance.

At the core of every thing is the dazzling mystery of its being, the dynamism that keeps it in existence. Existence is an act. The word exist is a verb. Art reveals the splendor, the superabundance of being, the mysterious gushing forth of the act of existing. An artist takes what is called secondary matter, matter that exists in nature and already has some form, e.g., paint, clay, stone, or some other material, and infuses pictorial or sculptural form to create a being that has existence as a work of art. The artist must so inform matter, must so dispose the masses, lines, shapes and tones, that the resulting work of art is in act.

How can a static object such as a painted canvas be in act? It happens by virtue of rhythms – rhythmic relations of lines, of shapes, of volumes, or of tones. These rhythms generate a perception of movement.

Look at Jean-Baptiste-Siméon Chardin’s Fruit, Jug and a Glass (c. 1727) in the National Gallery of Art in Washington (shown below). The cork at the lower left, surmounted by the white reflection in the water glass, anchors the composition. The right edge of the white reflection makes a sharp diagonal, pulling upward to the right where its forceful movement slows and expands to become the red-orange light on the jug. The opposite, shaded side of the jug presents a firm vertical edge, the bottom of which is nudged by the cool gray of the background just before it swells out and gives birth to the shaded, background peach and the foreground plums. The rounded rhythms of the plums give rise to another diagonal movement up and to the right, expanding through the rainbow from green to blue to purple to red, orange and finally yellow, with a crescendo of light in the burgeoning peaches.

Chardin’s painting is expansive. The splendor of being radiates from the painting as a whole and from the coordinated actions of each of its parts. He gets inside everything in his painting, to make every object exist from the inside out. He feels the creative energy in nature that holds things in being from within, the pulse of existence. The process by which he creates his work is a participation in the triumphant thrust, continually renewed, by which each and every being in nature achieves existence. 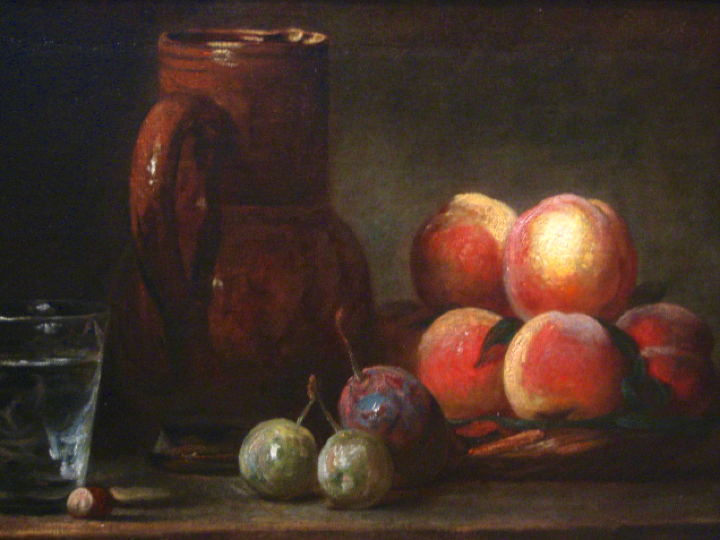 Nothing in the painting looks as if it were imposed from outside; every object exists spontaneously, freely, having its vital principle within. Each form is ceaselessly renewed from within by virtue of the rhythm of its contours, the pressure of its tone against those contours, and the precise registering of tonal relations inside and outside the form.

In the very structure of a masterpiece like Chardin’s we see an analogue to the mystery of the divine conservation of nature as described by Thomas Aquinas. Nothing exists unless God acts within it, as the wellspring of being, at every moment. There is no such thing as inertia of being, in nature or in art. Penetrating this mystery, Chardin’s art gives birth to forms whose presence is ceaselessly renewed by a continuous pulse.

Painting and sculpture converge with metaphysics, the philosophy of being, to reveal the spiritual depth of the activity of nature. Every being and every activity in nature, and the being and activity of nature as a whole, spring from the one activity of God. The being and action of each part of nature is truly its own and truly distinct from the action of God, though inseparable from it and impossible without it; just as the life and activity of each cell in an organism is distinct and to some degree spontaneous, though inseparable from the life of the whole organism and impossible without it.

An organism is a unity by virtue of its substantial form or soul. In actualizing the body’s potentiality for life, this vital principle gives life to the whole and to each of its parts. A true work of art manifests this organic unity of nature, and is itself an organic unity. The inner life that an artist gives to stone, paint or clay, the soul of the work, informs at once both the whole and each of the details.

Form, being good, is diffusive of itself, and in expanding itself it does not expend itself; in sharing its goodness it loses none of it. It can multiply itself without losing its unity. This truth underlies the sense of infinity that we feel in the presence of a painting in which one spirit unites a myriad of precisely individuated details.

In this way, form also reveals its kinship with love; for love (divine, creative love) does not divide itself up among its objects, but falls fully upon each; not in the same manner upon each, but upon each one according to its nature and potentiality. A work of art so formed breathes a fragrance of eternity, as divine love is eternal.