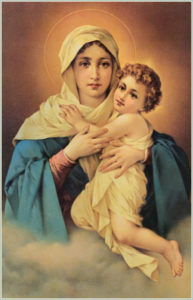 Today in the pre-1955 Traditional Catholic Missal is the Mass in Some Places (pro aliquibus locis) of Our Lady Refuge of Sinners.

The Refuge of Sinners Madonna is a painting by the Italian artist Luigi Crosio. It was painted in 1898 originally for the Kuenzil Brothers of Switzerland. In 1964 the Swiss province of the Schoenstatt Sisters purchased the original painting. It was then also called the Mother Thrice Admirable Madonna.

O Almighty and merciful God, Who in the Blessed Virgin Mary hast given sinners a refuge and a help, grant us, who are protected by her, the forgiveness of all our sins and the blessings of Thy mercy. Through Christ our Lord. Amen.

TAKEN FROM THE GLORIES OF MARY, CHAPTER 3, PART 2
by St. Alphonsus Liguori
Redemptorist Fathers, 1931
with Nihil Obstat and Imprimatur

There are three sources for our knowledge of and devotion to Our Lady, Refuge of Sinners:

St. John Bosco was given a vision wherein it was revealed that Our Lady is the resort of sinners and also the Lady of the Blessed Eucharist.

St. Alphonsus Liguori had a tremendous devotion to the Mother of God and suffered from scruples. He is known as the Doctor  of the Church who has promoted devotion to Our Lady as the hope or refuge of sinners and in his book, the Glories of Mary, he has several pages devoted to her as that refuge; the pages are scattered throughout, almost as a running theme within the overall theme.

There are specific devotions and feast days associated with our Lady of Refuge and or Our Lady of Confidence. The first is known as Our Lady of Montserrat [Spain]. The other is closely associated with Montserrat and Our Lady of Guadalupe and is a main devotion in Mexico. We have obtained a copy of the most famous of all of the Refuge images, that of the artist, Joseph de Paez. The image there is not quite as dark as Our Lady of Montserrat. All images of Our Lady of Refuge have her wearing the same crown as Our Lady of Confidence and also Jesus in her arms with His crown also, again just like the image of Confidence. So Our Lady must want sinners to also have confidence in her. While our Lady appears differently depending on the culture of the time, she really looks just like herself; thus, there is some resemblance in all her appearances and it is as if she is showing us all as we need to see her yet being herself physically speaking. I do not think it is a coincidence that her image as Refuge and Confidence are so similar. This presentation will focus on what St. Alphonsus instructs us regarding confidence in Mary as the refuge of sinners.

People outside the Church cannot endure our calling Mary our hope. They say that God alone is our hope, and that he curses those who put their trust in creatures according to Jeremiah the prophet in chapter 17, verse 5. They argue that since mary is a creature, she cannot be our hope. Yet, despite of this, the Church recommends that all priests and religious raise their voices every day in the name of the faithful and call mary by the sweet name of “Our Hope.”

St. Thomas Aquinas says that we can place our hope in a person in two ways—–as a a principle cause and as a mediate cause. Thus, those who expect something from a king put their trust in him as their sovereign, and in his ministers or his favorite intercessors. When the favor is granted, it really comes from the king, though the favorite is the intercessor or intermediary. hence the petitioners have a right to call this intermediary through whom they received the favor, their “hope.”

The King of Heaven, being infinite Goodness, desires in the highest degree to enrich us with His graces. But because confidence is a necessary condition for being heard, and because He wants to increase our confidence, He has given us His own mother as our Mother and intercessor, and granted her all power to help us. Those who put their trust in creatures alone, apart from God, as sinners are tempted to do, and who do not hesitate to outrage the Divine Majesty, just to gain the friendship and patronage of another human being, are certainly cursed by god in the sense intended by Jeremiah.

But those who place their trust in Mary, who [being the Mother of God] is able to secure grace and eternal life for them, are truly blessed and acceptable to the heart of God. he desires to see this greatest of all His creatures honored, since she honored and loved Him in this world more than all human beings and Angels together.

St. Bernard expounds the reason behind this when he says: “See the designs of God—–designs which make it possible for Him to dispense His mercy more abundantly. For, desiring to save the whole human race, He has laid the full price of redemption in Mary’s hands, letting her dispense it at her pleasure.”

And who needs this special intercessor and Mediatrix of all graces more, than the sinner, especially one tempted by despair? Mary does not know how to refuse compassion, she does not let the comfortless go away uncomforted, and she will persuade her Son to pardon the penitent and grieving sinner.