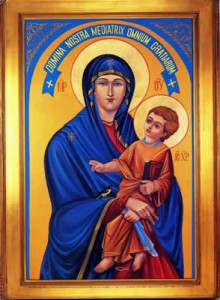 Our Lady Mediatrix of All Graces

There have been four Dogmas formally defined concerning the Blessed Virgin Mary. They are Mary, the Mother of God; the Perpetual Virginity of Mary; the Immaculate Conception; and the Assumption. Yet a fifth Dogma awaits to be proclaimed by the Church, one which has been prophesied by many Marian Saints. This Dogma is Mary, Mediatrix of All Graces. A lay movement called Vox Populi Mariae Mediatrici has been actively promoting the proclamation of this doctrine.  Inside the Vatican magazine reports that “currently it has collected from all around the world more than 4 million signatures, including more than 300 bishops. There are 32 cardinals on its advisory board….” (Inside the Vatican, “A New Marian Dogma,” by Leonie Caldecott, June‑July 1996, p. 18). Dr. Mark Miravalle, Associate Professor of Theology and Mariology at the Franciscan University of Steubenville, has authored a book entitled, Mary: Coredemptrix, Mediatrix. Advocate in which he proposes the dogmatic definition of Mary, Coredemptrix, Mediatrix and Advocate. Cardinal Luigi Ciappi, O.P., who served as Papal Theologian for all popes from Pope Pius XII to Pope John Paul II, endorsed this work with the words, “I share the hope of Dr. Mark Miravalle.”