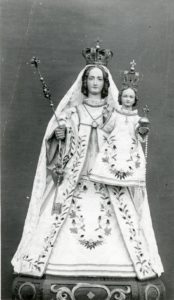 Our Lady of Consolation

The history of devotion to Our Lady of Consolation is briefly thus:

For centuries, going back into antiquity pious Catholics have had a devotion to Our Lady as consoler. Sometimes she was given the express title of Consolation. But the practice had never been formalized. Then, immigrants from northern Italy who were seeking better conditions for work and family life brought with them their devotion to Our Lady as the mother of consolation. The devotion to her under this title spread. In 1901 the rector of the Shrine in Turin established a religious institute to spread Marian piety through this title. He was the nephew of Saint Joseph Cafasso, the priest of the gallows and who was also from Turin. Saint Joseph Cafasso wrote a prayer in preparation for death that includes his intention of seeking consolation in Our Lady. You can read that prayer on his page in the Tradition Directory, HERE. The devotion is now worldwide, including Kenya and Ethiopia. In the United States and the United Kingdom there are many parishes/shrines dedicated to her under the title of Our Lady of Consolation. What ever prayer is used there is usually an invocation for the Church, for holiness in its members, for the light of faith, and peace therein.  (Click here for website of this article). 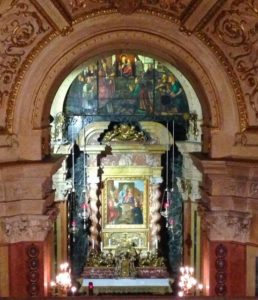 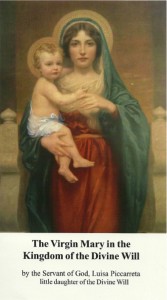 Volume 33; June 6, 1935
Luisa:  …Now, while He was saying this, my dear Jesus showed me, with facts, how the Sovereign Queen descended from Heaven with an unspeakable majesty, and a tenderness fully maternal; and She went around in the midst of creatures, throughout all nations, and She marked Her dear children and those who were not to be touched by the scourges.  Whomever my Celestial Mama touched, the scourges had no power to touch those creatures. Sweet Jesus gave to His Mama the Right to bring to Safety whomever She pleased.  How moving it was to see the Celestial Empress going around to all places of the world, taking creatures in Her maternal hands, holding them close to Her breast, hiding them under Her mantle, so that no evil could harm those whom Her maternal goodness kept in Her Custody, Sheltered and Defended.  O! if all could see with how much Love and tenderness the Celestial Queen performed this Office, they would cry of consolation and would love She who so much Loves us.