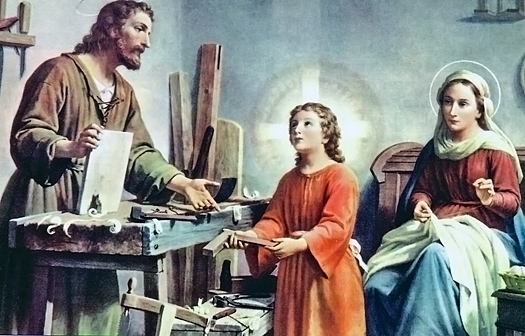 …Who can tell the beauty of the Little Baby who, at the moment of His birth, transfused, also externally, the rays of the Divinity? Who can tell the beauty of the Mother, who remained all absorbed in those Divine rays? And Saint Joseph? It seemed to me that he was not present at the act of the birth, but remained in another corner of the cave, all engrossed in that profound Mystery. And if he did not see with the eyes of the body, he saw very well with the eyes of the soul, because he remained enraptured in sublime ecstasy.

… As I continued to see the Holy Baby, I saw the Queen Mother on one side and Saint Joseph on the other, adoring the Divine Infant profoundly. Being all intent on Him, it seemed to me that the continuous presence of the Little Baby kept them engrossed in continuous ecstasy; and if they could work, it was a prodigy that the Lord operated in them; otherwise they would have remained motionless, unable to attend to their external duties. I too did my adoration, and then I found myself inside myself.

… Now, since I do not remember everything distinctly, I will tell of the past, all together and confusedly, starting from where I left when I was praying that He would take my mother to Paradise without her touching Purgatory. Then, on March 19, the day dedicated to Saint Joseph, in the morning, while I was in my usual state, my mother passed from this life into the sphere of eternity; and blessed Jesus, allowing me to see her as He was taking her, told me: “My daughter, the Creator takes his creature.”

… ‘My Love, there are certain times in which my life becomes bitter, especially because of the conditions in which You put me.’
And Jesus, knowing what I wanted to say to Him, added: “What do you fear? I will take care of everything; and when one directs you I give my grace to him; when another does, I give grace to the other. And then, it is not you whom they will assist, but Me; and I will be generous with them according to how they will appreciate my work, my sayings and my teachings.”
And I: ‘My Jesus, the Confessor appreciated very much what You said to me. He cared very much about it, and he worked very hard to make me write. What will You give to him?’
And Jesus: “I will give him Heaven as recompense, and I will consider his office as that of Saint Joseph and of my Mama, who, having assisted my Life on earth, had to go through hardships in order to nourish Me and assist Me. Now, since my Life is in you, I consider his assistance and sacrifices as though my Mama and Saint Joseph were doing them again for Me. Aren’t you happy?”
And I: ‘Thank You, O Jesus.”

… However, know that my Sacramental lot is even harder than my lot as an Infant. Though cold, the grotto was spacious, and had air to breathe; the Host too is cold, but so small that I almost lack air. In the grotto I had a manger with a little hay for bed; in my Sacramental Life, I don’t even have hay, and I have nothing but hard and ice cold metals for bed. In the grotto I had my dear Mama who took Me very often with her most pure hands, covered Me with ardent kisses in order to warm Me, soothed my crying, and nourished Me with her most sweet milk. In my Sacramental Life it is all the opposite: I do not have a Mama; if they take Me, I feel the touch of unworthy hands which smell like earth and muck. Oh! how I feel their stench – more than the manure I smelled in the grotto. Instead of covering Me with kisses, they touch Me with irreverent acts; instead of milk, they give Me the bile of sacrileges, of indifference, and of coldness. In the grotto, Saint Joseph never left Me without the light of a little lantern at night. Here in the Sacrament, how many times I remain in the dark also at night! Oh, how much more painful is my Sacramental lot! How many hidden tears, not seen by anyone. How many wails not listened to. If my lot as an Infant moved you to pity, much more should my Sacramental lot move you to pity.”

… “My daughter, calm yourself – I choose whomever I please. However, know that I begin all of my works between Myself and one creature; and then they are spread. In fact, who was the first spectator of the FIAT of my Creation? Adam, and then Eve. It surely wasn’t a multitude of people. Only after years and years did crowds and multitudes of people become spectators of It. In the second FIAT my Mama was the only spectator; not even Saint Joseph knew anything, and my Mama found herself more than in your condition: the greatness of the Creative Power of my work which She felt within Herself was such that, confused, She did not feel the strength to mention it to anyone. And if, then, Saint Joseph knew it, it was because I manifested it to him. So, this FIAT germinated like a seed within Her virginal womb; the ear of grain was formed in order to multiply It, and then It came to the light of day. But who were the spectators? Very few. In the room of Nazareth my dear Mama and Saint Joseph were the only spectators. Then, when my Most Holy Humanity grew up, I went out and I made Myself known – but not to all. Afterwards, It spread more, and It will still spread. So will the third FIAT be. It will germinate within you; the ear of grain will be formed; only the priest will have knowledge of It. Then, a few souls – and then, It will spread. It will spread, and will follow the same path as Creation and Redemption. The more crushed you feel, the more the ear of the third FIAT grows and is fecundated in you. Therefore, be attentive and faithful.”

…The same will be for my Will: knowledge will give life to the fruits of my Will. This is why I wanted to renew what I did in Redemption, choosing another virgin, remaining hidden with her for forty years and more, segregating her from everyone as if in a new Nazareth, to be free with her to tell the whole story, the prodigies and the goods contained in It, so as to be able to form the life of my Will in you. And just as I chose Saint Joseph to be together with Me and my Mama, as our cooperator, tutor and vigilant sentry for Me and for the Sovereign Queen, in the same way, I have placed near you the vigilant assistance of my ministers, as cooperators, tutors and depositories of the knowledges, goods and prodigies contained in my Will. And since my Will wants to establish Its Kingdom in the midst of peoples, through you I want to deposit this celestial doctrine in my ministers as my new apostles, so that first I may form with them the link of connection with my Will, and then they may transmit it into the midst of peoples. If it were not so, or were not to be so, I would not have insisted so much on having you write, nor would I have permitted the daily coming of the priest, but I would have left all my work between Me and you. Therefore, be attentive and leave Me free to do what I want in you.”
Now, who can say how confused I remained at this speaking of Jesus? I remained mute, and from the depth of my heart I repeated: ‘Fiat, Fiat, Fiat…’