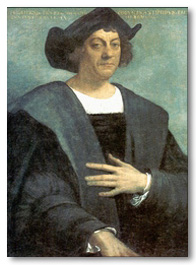 May Our Lord Jesus Christ, His Most Holy Mother Mary,
and the Servant of God Luisa Piccarreta
Bless and Protect the The Knights Of Columbus
Click here for history on the Knights of Columbus

And, if you’re interested in “the rest of the story”, try a Web search with the words:
“Christopher Columbus Catholic”

“Participation in the celebration of the Holy Mass opens our minds and heart to recognize the great Mystery of Faith, made present in every celebration of the Holy Mass. Our Holy Father Pope Benedict XVI, by his Apostolic Letter Summorum Pontificum, which was promulgated three years ago, on July 7th of 2007, has desired that the two expressions of the one Roman Rite in the Church, that is, the Roman Missal of Blessed John XIII and the Roman Missal of the Servant of God Pope Paul VI, should mutually enrich one another for the sake of a greater holiness of life among all the faithful and for the sake of drawing to Christ those who do not yet believe in Him Whose glorious presence with us in the Church appears most fully in the Sacred Liturgy, above all, in the Holy Sacrifice of the Mass.”
By His Excellency Archbishop Raymond Burke, Prefect of the Apostolic Signatura.
Wednesday, 29th September 2010

Note:  On November 20, 2010, Pope Benedict XVI elevated His Excellency Archbishop Burke to the Cardinalate, as Cardinal-Deacon of Sant’Agata dei Goti

My life is carried out before my Jesus in the Sacrament, and—oh! how many thoughts crowd my mind. I was thinking to myself: “After forty years, and months, that I had not seen the tabernacle, that I had not been given to be before His adorable Sacramental Presence—forty years, not only of prison, but of exile—finally, and after so
long an exile, I have come back as though to my fatherland, though a prisoner,
but no longer exiled, near my Jesus in the Sacrament; and not once a day, as I
used to do before Jesus made me a prisoner, but always—always.  My poor heart, if I have it at all in my chest, feels consumed at so much love of Jesus.”

But while I was thinking of this and other things, my highest Good, Jesus, moving in my interior, told me: “My daughter, do you think that My keeping you imprisoned for forty years and more has been by chance, without a great design of Mine? No! no! The number forty has always been significant and preparatory to great works. For forty years the Jews walked in the desert without being able to reach the Promised Land, their fatherland; but after forty years of sacrifices they had the good of taking possession of it. But, how many miracles, how many graces, to the point of nourishing them with the celestial manna during that time.

“A prolonged sacrifice has the virtue and strength to obtain great things from God. I Myself, during My Life down here, wanted to remain in the desert for forty days, away from all, even from My Mama, to then go out in public to announce the Gospel which was to form the life of My Church—that is, the Kingdom of Redemption. For forty days I wanted to remain as risen, to confirm My Resurrection and to place the seal upon all the goods of Redemption. So I wanted for you, My daughter: in order to manifest the Kingdom of My Divine Will, I wanted forty years of sacrifices. But, how many graces have I not given you! How many manifestations! I can say that in this great length of time I placed in you all the capital of the Kingdom of My Will, and everything that is necessary in order to make creatures comprehend it. So, your long imprisonment has been the continual weapon, always in the act of fighting with your very Creator, to have you manifest My Kingdom. . . .

. . . After this, I (Luisa) was following the Holy Divine Volition in the act in which my sweet Jesus separated from the Sovereign Queen to go into the desert . . .

. . . “My daughter (Luisa), the number of forty days is symbolic and significant in My Life down here.  When I (Jesus) was born, for forty days I wanted to remain in the grotto of Bethlehem—symbol of My Divine Will that, while being present in the midst of creatures, was as though hidden and outside of the city of their souls.  And I, in order to repair for the forty centuries of human will, wanted to remain outside of the city for forty days, in a miserable hut, crying, moaning and praying, to call back My Divine Will into the city of souls, so as to give It Its dominion.

“And after forty days I went out to present Myself to the Temple, and reveal Myself to the holy old Simeon.  He was the first city I was calling to the knowledge of My Kingdom; and his joy was so great, that he closed his eyes to the earth to open them to
eternity.  Forty days I spent in the desert, and then, immediately, I did My Public Life, to give them the remedies and the means in order to reach the Kingdom of My Will.  For forty days I wanted to remain on earth after My Resurrection, to confirm the Kingdom of the Divine Fiat and Its forty centuries of Kingdom that It was to possess.

“So, in everything I (Jesus) did down here, the first act was the restoration of the Kingdom; all other things entered into the secondary order, but the first link of connection between Me and creatures was the Kingdom of My Will. Therefore, when it is about My Will, I hold nothing back, neither light, nor sacrifices, nor manifestations, nor happiness—they are seas that I release from Myself so as to make It known, to make It reign, and to make It loved.”