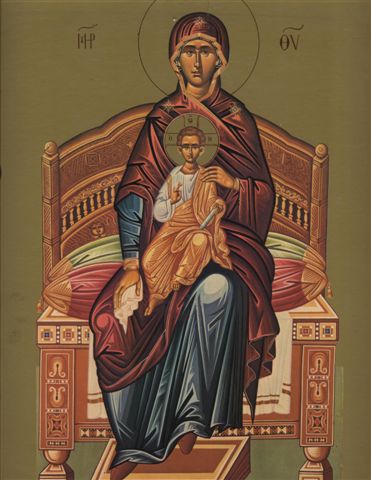 By Bishop Mark A. Pivarunas, CMRI

Feast of the Divine Maternity of the Blessed Virgin
October 11, 1995

The feast of the Divine Maternity of the Blessed Virgin Mary was instituted by Pope Pius XI to commemorate the 1500th anniversary of the Council of Ephesus, the third Ecumenical Council of the Church. How appropriate it was for this feast to be instituted on such an anniversary, for it was at the Council of Ephesus that the doctrine of the Divine Motherhood of Mary was defended against the heresy of Nestorius and his followers, who denied that there was one Divine Person in Christ with two natures, and in consequence of this denial, refused to recognize Mary by the title — Theotokos — Mother of God. For Nestorius and his followers falsely believed that in Christ there were two Persons — one divine and the other human, so that Mary was only the mother of the human person.

In our times, we may not find very many Nestorians, but there are many who call themselves Christians, but who deny to the Blessed Virgin Mary this title, Mother of God. Let us consider in this pastoral letter the Divine Maternity of Mary, in order to be able to better defend the Mother of Jesus Christ and to increase our esteem, love and devotion to her.

When we consider the Divine Maternity of the Blessed Virgin, we must begin by a study of the Person of Jesus Christ. In the Nicene Creed which we recite every Sunday at Holy Mass, we profess our firm belief in the Divinity of Jesus Christ:

“…And in one Lord Jesus Christ, the Only-begotten Son of God. Born of the Father before all ages. God of God; Light of Light; true God of true God. Begotten not made; consubstantial with the Father….”

And this belief in Christ’s Divinity is firmly rooted in divine revelation. In Sacred Scripture, we find a multitude of passages which manifest the Divinity of Jesus. St. John the Evangelist tells us in the first Chapter of his Gospel:

On this passage from St. John’s Gospel, St. Cyril of Alexandria, who staunchly defended the Faith at the Council of Ephesus, maintained in wonderful agreement with the Catholic Church:

“In no wise, therefore, is it lawful to divine the one Lord Jesus Christ into two Sons… For the Scripture does not say that the Word associated the person of a man with Himself, but that He was made flesh; that means nothing else but that He partook of flesh and blood, even as we do; wherefore, He made our body His own, and came forth man, born of a woman, at the same time without laying aside His Godhead, or His birth from the Father; for in assuming flesh He still remained what He was” (Mansi, 1.c.4. 891).

Furthermore, our Divine Lord Himself clearly claimed to be the Son of God, equal to the Father:

To the questions put to Him by the High Priest, Caiphas:

“Thou hast said it.”

And St. Paul reiterates the same belief in his Epistle to the Philippians:

“Have this mind in you which was also in Christ Jesus, Who though He was by nature God, did not consider being equal to God a thing to be clung to, but emptied Himself, taking the nature of a slave and being made like unto men and appearing in the form of man” (Phil. 2:5-8).

Thus, Pope Pius XI, in his encyclical Lux Veritatis of December 25, 1931, which commemorated the 1500th anniversary of the Council of Ephesus, reiterated the Catholic Faith in this doctrine:

“For we are taught, by Holy Scripture and by Divine Tradition, that the Word of God the Father did not join Himself to a certain man already subsisting in himself, but that Christ the Word of God is one and the same, enjoying eternity in the bosom of the Father, and made man in time. For, indeed, that the Godhead and Manhood in Jesus Christ, the Redeemer of mankind, are bound together by that wondrous union which is justly and deservedly called hypostatic, is luminously evident from the fact that in the Sacred Scriptures the same one Christ is not only called God and man, but it is also clearly declared that He works as God and also as man, and again that He dies as man and as God He arises from the dead. That is to say, He Who is conceived in the Virgin’s womb by the operation of the Holy Ghost, Who is born, Who lies in a manger, Who calls Himself the son of man, Who suffers and dies, fastened to the cross, is the very same Who, in a solemn and marvelous manner, is called by the Eternal Father ‘My beloved Son’ (Matt. 3:17; 17:5; 2 Peter 1:17), Who pardons sin by His divine authority (Matt. 9:2-6; Luke 5:20-24; 7:48; and elsewhere), and likewise by His own power recalls the sick to health (Matt. 8:3; Mark 1:41; Luke 5:13; John 9; and elsewhere). As all these things show clearly that in Christ there are two natures by which both divine and human works are performed, so do they bear witness no less clearly that the one Christ is at once both God and man because of that unity of person from which He is called ‘Theanthropos’ (God-Man).”

Having considered that Jesus Christ is one Divine Person with two natures, let us continue in the Nicene Creed. We profess that Jesus Christ “was incarnate by the Holy Ghost from the Virgin Mary.” This also is clearly found in Sacred Scriptures.

In the Old Testament, the Prophet Isaias predicted:

“Behold a Virgin shall conceive and bear a Son, and His Name shall be called Emmanuel (God with us)” (Isaias 7:14).

In the Gospel of St. Luke, we find that the Angel Gabriel announced to Mary:

“The Holy Ghost shall come upon thee, and the power of the Most High shall overshadow thee. And therefore also the Holy which shall be born of thee, shall be called the Son of God” (Luke 1:35).

And further on in the same Gospel, St. Elizabeth, “filled with the Holy Ghost,” cried out to the Blessed Virgin:

Not only do we find the reference for the Divine Maternity in Sacred Scripture, but also in Sacred Tradition. In the early Christian Church, there was no misunderstanding in the matter, for the early Fathers of the Church were very clear and firm on the Divine Motherhood of Mary.

In his Epistle to the Ephesians, St. Ignatius of Antioch (circa 110 A.D.) wrote:

“Our God Jesus Christ was born by Mary in her maternal womb.”

At another time, St. Ignatius wrote:

“There is only one Healer, composed at the same time of flesh and spirit, begotten and not-begotten… of God and of Mary, Jesus Christ, our Lord.”

“This Christ, Who as the Word of the Father was with the Father… was born of a virgin.”

“God is born in the womb of a mother.”

“We confess that the Son of God became Man by the assumption of flesh from the virgin Mother of God.”

“Let him who will not accept Mary as the Mother of God be excluded from God.”

These references from the early Fathers reflect the doctrine which was always held in the Catholic Church. And it was for this reason that when Nestorius had presented his false innovations, they were immediately rejected by the Catholic faithful of Constantinople. This rejection of the Nestorian heresy by the faithful manifests to us that even before Pope St. Celestine I and the Council of Ephesus formally deposed Nestorius from his See of Constantinople and condemned his errors, the faithful had already professed the true doctrine of the Divine Maternity of Mary.

All that has been quoted above from Sacred Scripture and Sacred Tradition on the Person of Jesus Christ and the Divine Maternity of Mary, was neatly summarized by Pope Pius XI in his encyclical, Lux Veritatis:

“And, indeed, if the Son of the Blessed Virgin Mary is God, assuredly she who bore Him is rightly and deservedly to be called the Mother of God. If there is only one Person in Christ, and this is Divine, without any doubt Mary ought to be called, by all, not the mother of Christ the man only, but Theotokos, or God-bearer. Let us all, therefore, venerate the tender Mother of God, whom her cousin Elizabeth saluted as ‘Mother of my Lord’ (Luke 1:43), who, in the words of Ignatius Martyr, brought forth God (Ad Ephes. 7:18-20); and from whom, as Tertullian professes, God was born; whom the Eternal Godhead has gifted with the fullness of grace and endowed with such great dignity.”

Let us never cease to honor the Virgin Mary, the Mother of God, especially when we repeat that most ancient, simple and profound prayer of the Catholic Church to her — “Hail Mary, full of grace, the Lord is with thee… Holy Mary, Mother of God, pray for us sinners, now and at the hour of our death. Amen.”