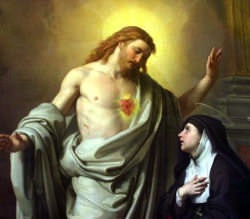 Marguerite Marie Alacoque was born in Burgundy, France on July 22, 1647. She was the fifth of seven children. When her father died, the eight-year old Margaret was placed in a convent school where she was immediately attracted to the life of the nuns. The nuns, in turn, were surprised at the little girl’s devotion and spiritual progress and were able to get permission for her to receive her First Communion at the age of nine. During the 17th century, it was extremely rare for a Catholic to receive Communion before he or she was a teenager.

At the age of 11, Margaret became bedridden when she developed paralysis because of polio.  Margaret recovered in 1662 after vowing to become a nun.  Her last nine years at home were not easy, however.  Her mother had turned Margaret and her sisters into little more than servants and she was completely against her daughter’s religious ideas.  After her brother kindly supplied her dowry, margaret joined the Order of the Visitation in June of 1671.

Margaret had received visions of Our Lord throughout the majority of her life and consequently had forgotten how rare this gift is.  Once in the convent, she renewed her devotion to God after struggling with serval other nuns who doubted her vocation.  Also, Margaret was beginning to see terrifying visions of Our Lord undergoing His Passion.

On December 27, 1673, Margaret was in Adoration when she received a vision of Jesus who invited her to take the place of Saint John the Apostle at the Last Supper and to rest her head on His Heart.  He told her how much He loves mankind and that He and chosen her to be the disciple of His Sacred Heart.

Our Lord Jesus Christ appeared to Margaret several more times and asked her to promote frequent Holy Hars and the First Friday devotion.  He also asked that the Friday after the octave of Corpus Christi be designated as the Feast of the Sacred Heart.

Margaret’s superior did not immediately believe what her daughter told her.  When Margaret later became ill, Mother de Saumaise said that if God let her die, it was a sign that her visions were false.  When the nun miraculously recovered, however, she was forced to present margaret’s case to higher authorities.

At first, Margaret was condemned as a liar.  However, her confessor, Saint Claude de la Colombiere, believed her and, which his help, devotion to the Sacred Heart of Jesus spread.

Saint Margaret Mary Alacoque died on October 17, 1690.  She was, unfortunately, not canonized until May 13, 1920.  She is considered the patron saint of devotees to the Sacred Heart and of polio patients.

Although her feast day was originally October 17, it was later moved to October 16 in order to give precedence to Saint Ignatius of Antioch. 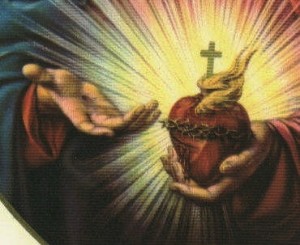 20.  To Federico Abresch from Bologna from the Servant of God Luisa Piccarreta

Most esteemed one in the Lord,

You cannot imagine the contentment I feel when I hear that one wants to live in the Divine Will, because it is a victory of Jesus; and as He conquers our will, we conquer His Own.  In the Kingdom of the Divine Will no one loses, we are all winners, both God and the creature.

I am surprised by your doubts.  How is it?  Don’t you know that Redemption is preparation for the Kingdom of the Divine Will?  And the Sacred Heart of Jesus is nothing other than the immense Reign of His Will.  It is not the Heart that dominates; it is the Divine Will that dominates His Divine Heart.  Poor Heart, if it did not have a Will to dominate it, it would be good at nothing.  If the will is good, the heart is good; if the will is holy, the heart is holy.  If our will gives place to the Divine, letting It raise Its throne in our will, the heart acquires the divine qualities by grace.  Therefore, both in the Divine and in the human order, it is always the will that has the first place, the prime act, its rule.  The heart and all the rest are in the secondary order… Therefore, to say that the Heart reigns, if the Divine Will does not reign, is absurd.  They can be called devotions, pious practices…; if the Divine Will does not reign, the Kingdom does not exist.  It exists in Heaven, but has no place on earth.  However, the Holy Church, organ and messenger of the Supreme Fiat, through the Sacred Heart, through the Celestial Mama, beseeches the Kingdom of the Divine Will.  She does not say it with words, but says it with facts.  The Divine Volition is the King – His Heart, His wounds, His precious Blood, the sweet Queen, form the ministers that surround the King, and through them beseech the Kingdom of the Divine Will in souls.

Now, how can one know It?  All the necessary things, the different circumstances in which we may find ourselves, are Will of God for us.  If we are really determined to live in It, God is so pleased that, if miracles are needed, He will make them in order not to let us use our will.  It is up to us to truly decide, and be willing to give even our life in order to live in It; and dear Jesus and the Sovereign Queen will take on the commitment, will be our sentries, and will surround us with such graces as to not let us be betrayed by our own wills.  More so, since our Lord does not teach difficult things, nor does He impose them or want them, but He facilitates all that He wants from us in an admirable way; even more, He puts Himself in our place to make it easy for us, and does together with us all that He wants us to do.

I commend myself to your prayers and also to my good daughter Amelia.  Make yourselves saints.  May the Divine Volition stretch out Its arms to you, to raise you in Its womb.  Look at all things as bearers of It, to give you Its life, Its sanctity… The little one – raise him holy, as a gift of the Fiat; who knows whether your desires to see him religious and holy may not be fulfilled.  So I leave you all in the Divine Volition; let me always find you in It.  And with a thousand regards to the father, to the mother and to the son, I say,

the little daughter of the Divine Will

Extending the Rays of the Sacred Heart of Jesus
Excerpt from the Book of Heaven – March 25, 1928

After this, my sweet Jesus made Himself seen with His Divine Heart unleashing many rays of light; each knowledge about the Divine Will was impressed at the point from which the rays started, in such a way as to form the most beautiful crown of light around that Divine Heart. And my beloved Jesus added:

“My daughter, look what a beautiful crown of glory and of light my Divine Heart possesses! A more beautiful and refulgent crown It could not possess. These rays are all the knowledges about my Will; however, these rays are hampered – they cannot extend, because their knowledges are not known; this is why they cannot extend and expand so as to fill the whole earth with light. It happens as it would to the Sun if its rays, which start from the center of its sphere, were forced to remain in the air, without being able to extend so as to touch the earth and invest it with light and heat. Unable to extend its rays, the Sun would not be able to give the effects that its light contains, nor could the earth receive them. There would be a certain distance between the earth and the light of the Sun, and this distance would prevent the Sun from doing good to the earth, and the earth would be sterile and infertile. Such are the knowledges about my Fiat:

if they are not made known, their rays cannot extend and take souls as though in their hands to warm them, to remove from them the torpor of the human will, to mold them anew, to transform them again in the life which my Fiat wants to infuse into them; because these knowledges are, and contain, the new creation of transforming the creature as he came out of Our creative hands.”