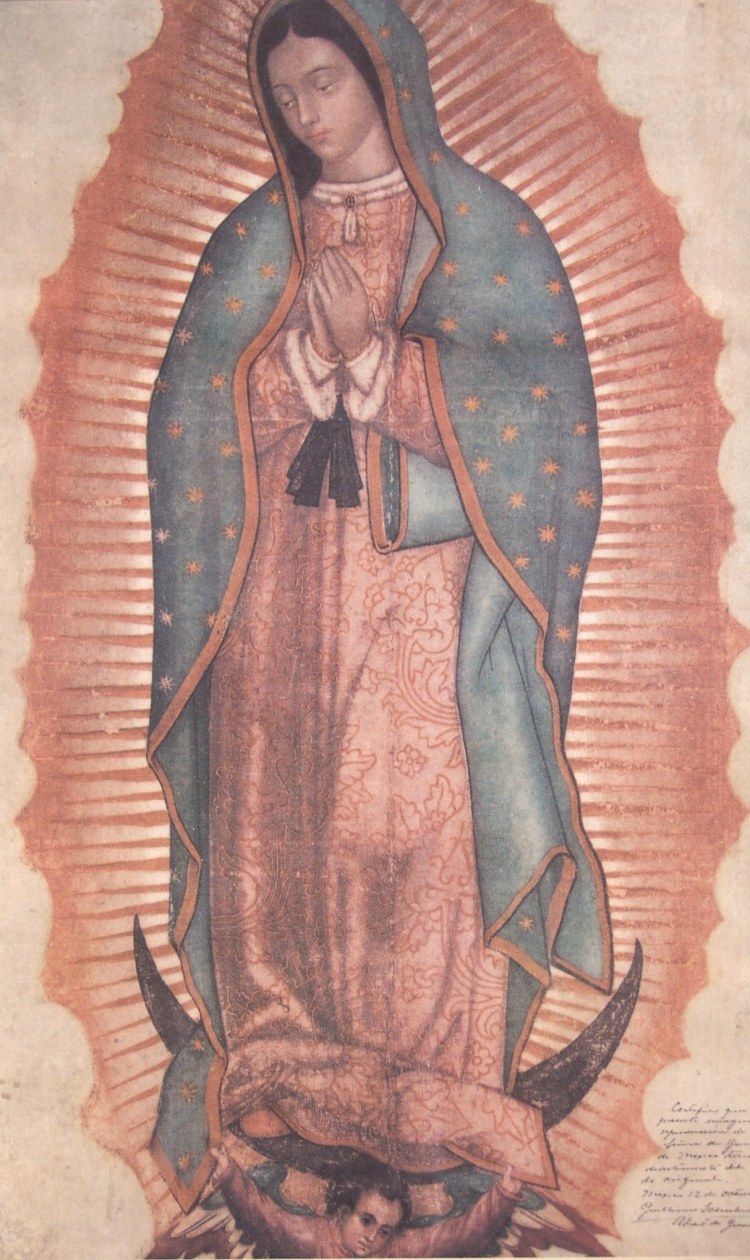 The Tilma of Guadalupe Story

Saint Juan Diego was born in 1474 as Cuauhtlatoatzin, a native to Mexico. He became the first Roman Catholic indigenous saint from the Americas.

Following the early death of his father, Juan Diego was taken to live with his uncle. From the age of three, he was raised in line with the Aztec pagan religion, but always showed signs of having a mystical sense of life.

He was recognized for his religious fervor, his respectful and gracious attitude toward the Virgin Mary and his Bishop Juan de Zumarraga, and his undying love for his ill uncle.

When a group of 12 Franciscan missionaries arrived in Mexico in 1524, he and his wife, Maria Lucia, converted to Catholicism and were among the first to be baptized in the region. Juan Diego was very committed to his new life and would walk long distances to receive religious instruction at the Franciscan mission station at Tlatelolco.

On December 9, 1531, Juan Diego was in a hurry to make it to Mass and celebrate the Feast of the Immaculate Conception. However, he was stopped by the beautiful sight of a radiant woman who introduced herself, in his native tongue, as the “ever-perfect holy Mary, who has the honor to be the mother of the true God.”

Mary told Juan Diego she was the mother of all those who lived in his land and asked him to make a request to the local bishop. She wanted them to build a chapel in her honor there on Tepeyac Hill, which was the site of a former pagan temple.

When Juan Diego approached Bishop Juan de Zumarraga telling of what happened, he was presented with doubts and was told to give the Bishop time to reflect on the news.

Later, the same day, Juan Diego encountered the Virgin Mary a second time and told her he failed in granting her request. He tried to explain to her he was not an important person, and therefore not the one for the task, but she instead he was the man she wanted.

Juan Diego returned to the Bishop the next day and repeated his request, but now the Bishop asked for proof or a sign the apparition was real and truly of heaven.

Juan Diego went straight to Tepeyac and, once again, encountered the Virgin Mary. After explaining to her what the Bishop asked, she agreed and told him she’d provide him with proof on the next day, December 11.

However, on the next day, Juan Diego’s uncle became very sick and he was obligated to stay and care for him. Juan Diego set out the next to find a priest for his uncle. He was determined to get there quickly and didn’t want to face the Virgin Mary with shame for missing the previous day’s meeting.

But the Virgin Mary intercepted him and asked what was wrong. He explained his situation and promised to return after he found his uncle a priest.

She looked at him and asked “No estoy yo aqui que soy tu madre?” (Am I not here, I who am your mother?) She promised him his uncle would be cured and asked him to climb to the hill and collect the flowers growing there. He obeyed and found many flowers blooming in December on the rocky land. He filled his tilma (cloak) with flowers and returned to Mary.

The next day, Juan Diego found his uncle fully healed from his illness. His uncle explained he, too, saw the Virgin Mary. She also instructed him on her desires to have a church built on Tepeyac Hill, but she also told him she wanted to be known with the title of Guadalupe.

The bishop first kept Juan Diego’s imprinted cloak in his private chapel, but then placed it on public display in the church built on Tepeyac Hill the next year.

The first miracle surrounding the cloak occurred during the procession to Tepeyac Hill when a participant was shot in the throat by an arrow shot in celebration. After being placed in front of the miraculous image of Mary, the man was healed.

Juan Diego moved into a little hermitage on Tepeyac Hill, and lived a solidarity life of prayer and work. He remained there until his death on December 9, 1548, 17 years after the first apparition.

News of Our Lady’s apparitions caused a wave of nearly 3,000 Indians a day to convert to the Christian faith. Details of Juan Diego’s experience and Mary’s words moved them deeply.

During the revolutions in Mexico, at the beginning of the 20th century, nonbelievers attempted to destroy the Image with an explosion. The altar?s marble steps, the flower-holders, and the basilica windows were all very damaged, but the pane of glass protecting the Image was not even cracked.

Juan Diego’s imprinted cloak has remained perfectly preserved from 1531 to present time. The “Basilica of Guadalupe” on Tepeyac Hill has become one of the world’s most-visited Catholic shrines.

St. Juan Diego was beatified on May 6, 1990 by Pope John Paul II and canonized on July 31, 2002. His feast day is celebrated on December 9 and he is the patron saint of Indigenous people.