In today’s liturgy is the Blessing and Procession of the Palms, in which everything overflows with a holy joy which enables us, after twenty centuries, to revive the spirit of the magnificent scene of Our Lord’s triumphal entry into Jerusalem.

At Jerusalem, in the fourth century, on the very spot where the event took place, there was read the Gospel narrative in which we see Christ, hailed as King of Israel and taking possession of His capital, Jerusalem, which is really no more than the type of Jerusalem above.  After this, a bishop mounted on an donkey, rode up to the Church of the Resurrection on the summit of the Mount of Olives, surrounded by a multitude carrying palms and singing anthems and hymns.  This ceremony was preceded by the solemn reading of the passage from the Exodus in which the Flight from Egypt is related.  God’s people were encamped under the shadow of palm trees, near the twelve fountains where Moses promised them the manna of the Eucharist.  The Church of Rome adopted this practice about the ninth century and added to it the rite for the Blessing of the Palms, which has given to to this Sunday the name of Palm Sunday. 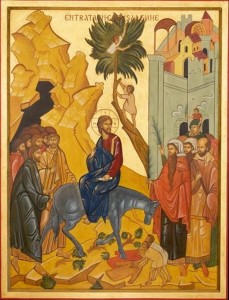 This morning, feeling all embittered, I saw myself still so bad, that I almost did not dare to go in search of my highest and only Good. But the Lord, looking not at my miseries, still deigned to come, telling me: “My daughter, is it Me that you want? Well then, I have come to cheer you – let us be together, but let us remain in silence.”

After staying for some time, He transported me outside of myself, and I saw that the Church was celebrating the Day of the Palms; and Jesus, breaking the silence, told me: “How much volubility, how much inconstancy! Just as today they cried out ‘Hosanna!’, proclaiming Me as their King, another day they cried out ‘Crucify Him! Crucify Him!’ My daughter, the thing that displeases Me the most is inconstancy and volubility, because this is the sign that the truth has not taken possession of these souls. Even in things of Religion, it may be that they find their satisfaction, their own convenience and interest, or that they just find themselves in that party; but tomorrow these things may be missing, or they may find themselves involved in other parties – and here is how they deviate from Religion, and with no regret they give themselves to other sects. Indeed, when the True Light of Truth enters a soul and takes possession of a heart, she is not subject to inconstancy. On the contrary, she sacrifices everything for Love of It and to let herself be mastered by It alone; and with unconquered heart she despises everything else which does not belong to the Truth.” And while saying this, He cried over the condition of the present generation, worse than in those times, subject to inconstancy according to wherever the winds blow.

Continuing in my usual state, my lovable Jesus made Himself seen for a little, with a nail inside His Heart; and drawing near my heart He would touch it with that nail, and I would feel mortal pains. Then He said to me: “My daughter, it is the world that drives this nail deep inside My Heart, giving Me a continuous death. So, by Justice, just as they give Me continuous death, I will allow that they give death among themselves, killing one another like many dogs.” And while saying this, He made me hear the screams of the rioters, to the point that I remained deafened for four or five days. Then, as I was very much in suffering, He came back a little later and told me: “Today is the Day of the Palms in which I was proclaimed King. All must aspire to a kingdom, but in order to acquire the eternal kingdom it is necessary for the creature to acquire the regimen of herself through the dominion of her passions. The only means is suffering, because suffering is Reigning; that is, through patience, man puts himself in his place, becoming king of himself and of the Eternal Kingdom.”