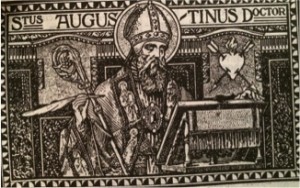 St. Augustine was born in 354 at Tagasta near Algiers.  His mother, St. Monica, taught him early to pray.  Although he had received with delight her holy teaching, he went headlong into the gravest disorders.  Carthage not offering him a theatre worthy of his genius, he went to Rome and obtained the post of master of rhetoric at Milan.  “My iniquities,” he confesses, “were like a snowball growing in size as it rolls.” His desolate mother prayed to God incessantly with tears, still following the steps of her son.  St. Ambrose, Bishop of Milan, received him kindly and enlightened him in Divine knowledge. One day, inspired by Heaven, he opened the Espistles of St. Paul and read;  “Wallow not in debauchery and impurity; but chothe yourselves in Our Lord Jesus Christ.”  His irresolution immediately ceased and at 33 years of age, on Easter Eve, 387, he was baptized.

Seven months after this great happiness, St. Monica died asking her son to “remember her at the Altar of God”.  Augustine, becoming a Priest, offered the Holy Sacrifice for her.  “Lord,” he often said, “have mercy on my mother; she was good, she pardoned easily, pardon her also her sins.”

Made Bishop of Hippo, at the age of 41, he began from that moment to live Canonically, that is to say, in common with his Clerks.  This Community gave Bishops and Priests to many Churches, and thus the Institute of St. Augustine spread little by little in Africa and more specially in Gaul. The Rule of St. Augustine, which makes him one of the four Great Founders of Religious Orders, is drawn from the 211th epistle which he wrote for nuns, and which later on was adapted for men.

Owing to the sublimity of his knowledge and the ardor of his vow, this Saint is also one of the great Doctors of the West.

He died in 430 A.D, after an Episcopate of 36 years, reciting the Penitential Psalms.

Servant of God Luisa Piccarreta:  At the end I said to Him (Our Lord Jesus Christ): “Lord, I repent of the offenses given by me and by all creatures of the earth, and I repent and I am sorry for the sole reason that we have offended You, Highest Good, who deserve love, while we have dared to give You offenses.’”