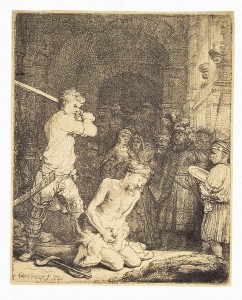 Passion of St. John the Baptist

Having solemnized on June 24th the joyous birth of St. John the Baptist, the Church today honors his glorious birth in Heaven.  Excepting the Blessed Virgin, he is the only Saint whose temporal birthday is observed.

John the Precursor, who had passed thirty years in the desert where he had flourished like the palm-tree and grown like the cedar of Lebanon, had the courage to openly reproach Herod which the scandal of his illegitimate union with Herodias, his sister-in-law, whose husband Philip, was still alive.  “It is against the law,” he said to the king, “for you to take the wife of your brother.”  Herodias forced Herod to imprison him, and used an unexpected opportunity to obtain through her daughter Salome the beheading of the Saint who thwarted her criminal passion.

On this day St. John completes his mission, adding the testimony of his martyrdom to the testimony he gave to Christ at His Baptism.  St. John was put to death towards the Passover, one year before the Passion of Our Lord Jesus Christ, but the anniversary is solemnized on the day when St. John’s venerable head was found at Emesa, in Syria, in 453 AD.

This morning, on coming, blessed Jesus told me:  “My daughter, crosses, mortifications, are as many baptismal founts, and any kind of cross which is dipped in the thought of my Passion loses half of its bitterness and its weight decreases by half.”  And He disappeared like a flash.