Tomorrow is the Feast Day of 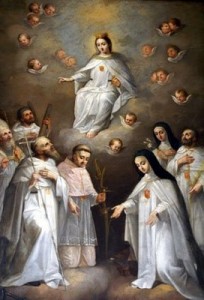 The Divine Will was everything for man, and with It he needed nothing. Before the scourging, Jesus wanted to be stripped, in order to give back to the creature her royal garments.

I was contemplating the mystery of the Scourging, compassionating my sweet Jesus in the moment when He saw Himself so confused in the midst of enemies – stripped of His garment, under a storm of blows. And my adorable Jesus, coming out from my interior in the state in which He found Himself when He was scourged, told me: “My daughter, do you want to know the reason for which I was stripped when I was scourged? In every mystery of My Passion, first I occupied Myself with adjusting the fracture between the human will and the Divine, and then with the offenses which this fracture produced.

“When man in Eden broke the bonds of the union between the Supreme Will and his will, he stripped himself of the royal garments of My Will, and clothed himself with the miserable rags of his will – weak, inconstant, incapable of doing any good. My Will was a sweet enchantment for him, which kept him absorbed within a most pure light, which made him know nothing but His God, from Whom he came, and which gave him nothing else but immeasurable happiness. And he was so absorbed by all that his God gave him, that he gave no thought to himself. Oh, how happy man was, and how the Divinity delighted in giving him so many particles of His being for as many as the creature can contain, in order to render him similar to Himself. So, as soon as he (Adam) broke the union of Our Will with his, he lost the royal garment; he lost enchantment, light, happiness. He looked at himself without the light of My Will, and in looking at himself without the enchantment which kept him absorbed, he knew himself and felt ashamed. He was afraid of God, to the extent that nature itself felt its sad effects: he was cold, felt his nakedness, and felt the strong need to cover himself. And just as Our Will kept him in the harbor of immense happinesses, so did his will put him in the harbor of miseries.
Our Will was everything for man, and in It he found everything. It was fair that, having been delivered by Us and living in Our Will as Our tender child, he would live of It. And this Will was to make up for all that he needed. Therefore, when he wanted to live of his will, he needed everything because the human will does not have the power to make up for all needs, nor does it contain the source of good within itself. So, he was forced to earn with hardship the necessary things of life.

“See, then, what it means not to be united with My Will! Oh, if all knew It, how they would have one single yearning: that my Will come to reign upon earth!

Therefore, had Adam not withdrawn from the Divine Will, also his nature would have had no need of clothing; he would not have felt the shame of his nakedness, nor would he have been subject to suffer cold, heat, hunger, weakness. But these natural things were almost nothing; they were, rather, symbols of the great good which his soul had lost.

“So, My daughter (Luisa), before being tied to the column to be scourged, I (Jesus) wanted to be stripped in order to suffer and repair the nakedness of man, when he stripped himself of the royal garment of My Will. I felt such confusion and pain within me in seeing Myself stripped in the midst of enemies who were making fun of Me, that I cried over the nakedness of man and I offered my nakedness to My Celestial Father, so that man might be clothed once again with the royal garment of My Will. And as ransom, so that it would not be denied to Me, I offered My Blood, My flesh torn to shreds, and I let Myself be stripped not only of my garment, but also of My flesh, to be able to pay the price and satisfy for the crime of nakedness of man. I poured so much Blood in this mystery that in no other did I pour so much of it – so much as to be enough to cover him with a second garment, a garment of Blood; to cover him again and therefore warm him and wash him, to dispose him to receive the royal garment of My Will.”

On hearing this, surprised I said: “My beloved Jesus, how can it be possible that, because he withdrew from Your Will, man felt the need to clothe himself, was ashamed, was afraid…? And then, You always did the Will of the Celestial Father, You were One with Him, and your Mama never knew her Will – yet, You felt the needed of clothing, of food, and You suffered cold and heat…”

And Jesus added: “Yet, My daughter, it is exactly so. If man felt ashamed of his nakedness and was subject to many natural miseries, it was exactly because he lost the sweet enchantment of My Will; and even though the evil was done by his soul, not by his body, the body, however, was an indirect accomplice in the bad will of man. His nature remained as though profaned by the bad will of man; therefore both one and the other had to feel the pain of the evil done. As far as Myself, indeed I always did the Supreme Will, but I did not come to find an innocent man, a man before sin; rather, I came to find a man sinner and with all his miseries. And so I had to join him, taking upon Myself all the evils of man, and subjecting Myself to all the necessities of life, as if I were one of them. However, in Me there was this prodigy: if I wanted, I would need nothing, either clothing, food or other things. But I did not want to use it out of love for man. I wanted to sacrifice Myself in everything, even in the most innocent things created by Me, in order to prove him My ardent love. Even more, this served to beseech My Divine Father, so that, out of regard for Me and for My will completely sacrificed to Him, He would give back to man the noble royal garment of Our Will.”