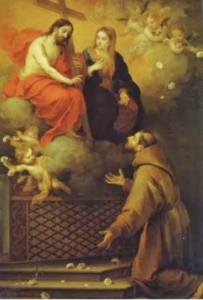 St. Francis, repaired three chapels. The third was popularly called the Portiuncula or the Little Portion, dedicated to St. Mary of the Angels. It is now enclosed in a sanctuary at Assisi.

The friars came to live at the Little Portion in early 1211. It became the “motherhouse” of the Franciscans. This is where St. Clare came to the friars to make her vows during the night following Palm Sunday in 1212 and where Sister Death came to Francis on 3 October 1226.

Because of the favors from God obtained at the Portiuncula, St. Francis requested the Pope to grant remission of sins to all who came there. The privilege extends beyond the Portiuncula to others churches, especially held by Franciscans, throughout the world.

To obtain the Portiuncula plenary indulgence, a person must visit the Chapel of Our Lady of the Angels at Assisi, or a Franciscan sanctuary, or one’s parish church, with the intention of honoring Our Lady of the Angels. Then perform the work of reciting the Creed and Our Father and pray for the Pope’s designated intentions. You should be free, at least intentionally, of attachment to venial and mortal sin, and truly repentant. Make your sacramental confession 8 days before or after. Participate at assist at Mass and receive Holy Communion 8 days before or after.