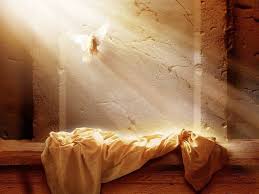 The Virgin Mary in the Kingdom of the Divine Wil; Day Twenty-Nine

The Virgin Mary:  “Blessed child, you know that I was present at the Resurrection of My Son.  But I did not say a word to anyone, waiting for Jesus Himself to manifest Himself as Risen, Glorious and Triumphant.  The first one to see Him Risen was the fortunate Magdalene; then the pious women.  And all came to Me telling Me that they had seen Jesus Risen, that the Sepulcher was empty; and I listened to all, and with an air of Triumph I confirmed all in the Faith of the Resurrection.  By evening, almost all of the Apostles had seen Him, and all felt as though Triumphant at having been the Apostles of Jesus.  What change of scene, dear child – symbol of those who have first let themselves be dominated by the human will, represented by the Apostles who run away, abandoning their Master; and their fear and fright is such that they hide, and Peter reaches the point of denying Him.  O! if they had been dominated by the Divine Will, they would never have run away from their Master, but, Courageous and as Triumphers, would never have departed from His side, and would have felt honored to lay down their lives to defend Him.”