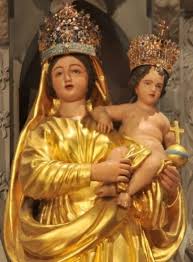 DURING the French Revolution of the late 18th century, priests and religious were persecuted and often had to go into hiding in order to administer the Sacraments and keep their vocation and apostolates. This is what happened with the Ursuline nuns of the Convent of Pont-Saint-Esprit. One of the nuns, Agathe Gensoul, who could no longer use her religious name, Mother St. Michel, still lived her vocation, starting a school with another Ursuline, Sophie Ricard. Agathe had a cousin who was an Ursuline also, but who lived in America, in New Orleans, which had been at that time under Spanish domain, but had been taken back by the French. Fearing French persecution, the Spanish Ursulines there went back to Spain, which left the convent in need of more nuns.

So Agathe or Mother St. Michel, applied to the bishop for the transfer to New Orleans, who refused her request because of the trouble in France. He told her that the Pope would have to approve her move. He, however was under house arrest. The situation was near impossible. But this did not discourage Agathe, who immediately wrote a letter to Pope Pius VII, but after three months, she was still without means to send it.

One day, while praying before a statue of Mary, she was inspired with this prayer:

“O Most Holy Virgin Mary, if you obtain a prompt and favorable answer to my letter, I promise to have you honored in New Orleans under the title of Our Lady of Prompt Succor.”

She not only found a way to send the letter a few days later, but the Pontiff replied within a month! He granted his permission, blessing her new undertaking, which surprised the bishop who asked to bless the statue that Mother St. Michel had carved to take with her to New Orleans.

The statue was enshrined in the Ursuline convent there on December 30,1810. Two years later, another miracle would be attributed to the Virgin under this title. A terrible fire ravaged the city in 1812, and the wind was rapidly driving it in the direction of the convent of the Ursulines. One of the nuns, Sister St. Anthony, placed a small replica of Our Lady of Prompt Succor in her window that faced the approaching fire, while Mother St. Michel prayed aloud, asking Our Lady for help. Immediately the wind changed direction of the flames.

Mary’s help has been sought from the shrine ever since, both in time of war [the Battle of New Orleans] and during the threat of hurricanes, a persistent peril on the Gulf Coast.

Her Feast is January 8.