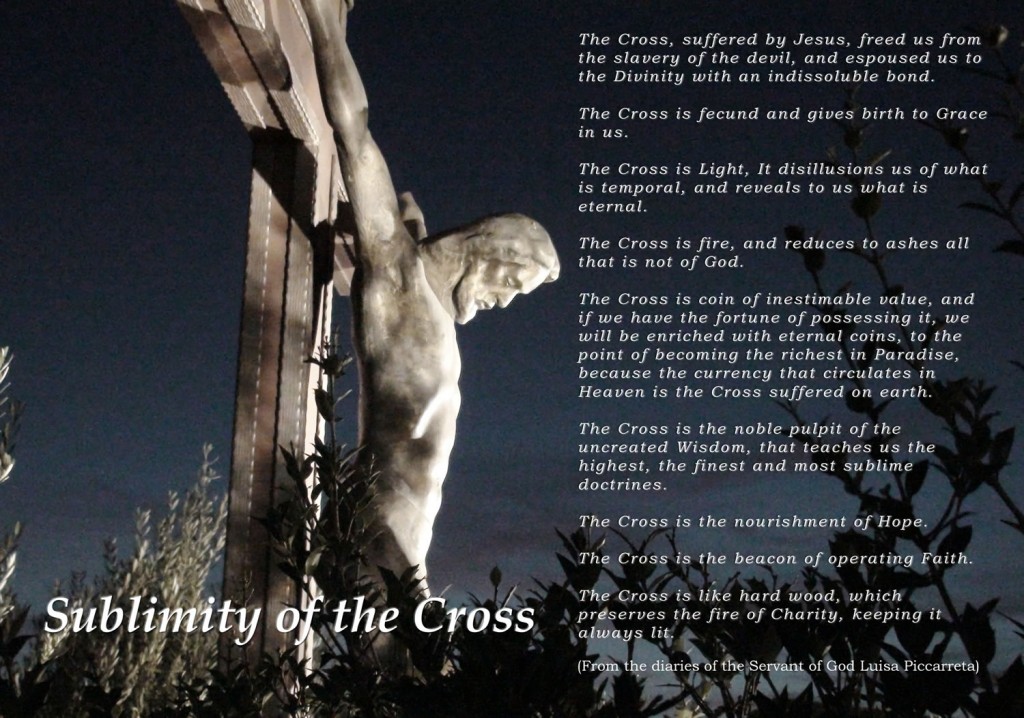 Based on Excerpt from the
Book of Heaven
Volume 3, December 2 1899

The feast of the Elevation of the Venerable Cross is a very ancient feast.  However, it has been attributed to the dedication of Constantine’s basilica, which enclosed both Calvary and the Holy Sepulcher, that took place on September 14 in 335.  It was at the same time the anniversary of the finding of the Holy Cross.

However, about 615, Chosroes, king of Persia, took Jerusalem and carried off the relic of the Holy Cross.

Fourteen years later, the emperor Heraclius defeated Chosroes.  He then insisted on the restitution of the Cross and carried it on his shoulders in great pomp to Calvary.

Heraclius, who was loaded with ornaments of gold and precious stones, was held back by an invincible force at the entrance gate.

Zacharias, bishop of Jerusalem, said to him:  “With these ornaments you are far fro imitating the poverty of Jesus Christ and HIs humility in bearing His Coss.”  Heraclius thereupon cuffed his splendid garb and walked barefooted with a common cloak on his shoulders, to Calvary, where he again deposited the Cross.

Eloquent praise of the Cross

… Jesus: Let Me hear your voice that cheers my hearing. Let us converse together a little; I have spoken to you many times about the Cross; today, let Me hear you speak of the Cross.

I felt all confused; I did not know what to say. But as He sent mea ray of intellectual light, to make Him content I began to say:

My Beloved, who can say to You what the Cross is? Your mouth alone can speak worthily of the sublimity of the Cross; but since You want me to speak, I will do it.

The Cross, suffered by You, freed me from the slavery of the devil, and espoused me to the Divinity with an indissoluble bond.

The Cross is fecund and gives birth to Grace in me.

The Cross is Light, It disillusions me of what is temporal, and reveals to me what is eternal.

The Cross is fire, and reduces to ashes all that is not of God, to the point of emptying my heart of the tiniest blade of grass that might be in it.

The Cross is coin of inestimable value, and if I have, O Holy Spouse, the fortune of possessing it, I will be enriched with eternal coins, to the point of becoming the richest in Paradise, because the currency that circulates in Heaven is the Cross suffered on earth.

The Cross, then, makes me know myself; not only this, but It gives me the knowledge of God.

The Cross grafts all virtues into me.

The Cross is the noble pulpit of the uncreated Wisdom, that teaches me the highest, the finest and most sublime doctrines. So, only the Cross will reveal to me the most hidden mysteries, the most secret things, the most perfect perfection, hidden to the most erudite and learned of the world.

The Cross is like beneficent water that purifies me; not only this, but It administers to me the nourishment for the virtues, It makes them grow, and only then does It leave me, when It brings me back to Eternal Life.

The Cross is like celestial dew, which preserves and embellishes for me the beautiful lily of purity.

The Cross is the nourishment of Hope.

The Cross is the beacon of operating Faith.

The Cross is like hard wood, which preserves the fire of Charity, keeping it always lit.

The Cross is like dry wood, which dispels and puts to flight all the smokes of pride and of vainglory, producing the humble violet of humility in the soul.

The Cross is my Paradise on earth, in such a way that if the Paradise of the Blessed up there, is of delights, the Paradise down here is of sufferings.

The Cross is the chain of most pure gold that connects me to You, my Highest Good, and forms the most intimate union that can possibly be given, to the point of making my being disappear. And It transforms me in You, my Beloved, to the point that I feel lost within You, and I live from your very Life.

After I said this (I don’t know whether it is nonsense), my lovable Jesus was all delighted in listening to me, and taken by enthusiasm of love, kissed me all over, and said to me:

Brava, brava, my beloved – you spoke well! My Love is fire, but not like the terrestrial fire which, wherever it penetrates, renders things sterile and reduces everything to ashes. My fire is fecund, and it renders sterile only that which is not virtue. To all the rest it gives life, it makes beautiful flowers bloom, it makes the most delicious fruits mature, and forms the most delightful celestial garden. The Cross is so powerful, and I communicated so much grace to It, as to render It more effective than the very Sacraments; and this, because in receiving the Sacrament of my Body, the dispositions and free concourse of the soul are needed in order to receive my graces, and many times these may be lacking; while the Cross has the virtue of disposing the soul to grace.

The Cross gives us the features and the likeness of Jesus.

My adorable Jesus continues to come, for just a little and like a shadow, and even when He comes He does not say anything. This morning, after He renewed in me the pains of the cross as many as two times, looking at me with tenderness while I was suffering the spasm of the piercings of the nails, He told me:

The cross is a mirror in which the soul admires the Divinity, and by reflecting herself in it, she acquires the features and the likeness that most resembles God. The cross must not only be loved and desired, but one must consider it an honor and a glory. This is to operate as God and to become like God by participation, because I alone gloried in the cross and considered suffering an honor, and I loved it so much that in my whole life I did not want to be one moment without the cross.

Who can say what I understood about the cross from this speaking of blessed Jesus?  But I feel mute in expressing it with words. Ah, Lord, I pray You to keep me always nailed to the cross, so that, having this divine mirror ever before me, I may clean all my stains and embellish myself ever more in your likeness.

More than Sacrament, the Cross seals God in the soul.

As I was in my usual state, or rather, with a little bit of concern about something that it is not necessary to say here, my sweet Jesus, on coming, told me:

And they are sacred vessels, and every once in a while it is necessary to dust them off. Your bodies are as many sacred vessels, in which I make my dwelling, therefore it is necessary that I do some little dusting every now and then, that is, that I visit them with some tribulation, so that I may remain in them with more decorum. Therefore, be calm.

Later, after I received Communion, having renewed in me the pains of the crucifixion, He added:

My daughter, how precious is the cross! See now: in giving Itself to the soul, the Sacrament of my Body unites her with Me, It transforms her, to the point that she becomes one with Me. But as the species are consumed, the union, truly established, ceases. Not with the cross. The cross takes God and unites Him with the soul forever, and It places Itself more surely as a seal. Therefore, the cross seals God in the soul, in such a way that there is never separation between God and the crucified soul.