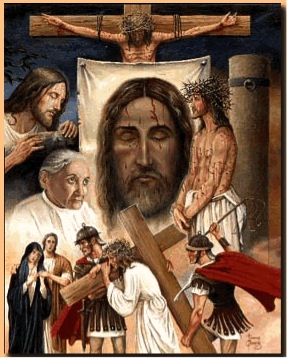 The Exaltation of The Holy Cross

We adore You O Christ and we bless You, because by Your Holy Cross You have redeemed the world!

The faithful bow, venerate and devoutly kiss The Holy Cross.

“Come, all you faithful, let us adore the Life-giving tree, upon which Christ the King of glory willingly stretched out His arms and raising us up, restored us to that original happiness, the enemy stole from us in the past, seducing us by vain pleasures so that we became estranged from God.
Come, all you faithful, let us bow down before the tree, through which we have become worthy to crush the heads of invisible enemies.
Come, all you nations, let us extol the Cross, perfect salvation of fallen Adam.
Our most faithful kings glory in you, for by your power they overcame their enemies.
Today we Christians with awe kiss you, we glorify the crucified God upon you and say,
‘O Lord, crucified on the Cross, have mercy on us, for you are good and you love mankind.’”

To arouse ourselves to a greater veneration and love for The Holy Cross, let us frequently call to mind those profound thoughts expressed by the great venerator of The Holy Cross, St. Ephrem the Syrian (+373) in the following hymn:

On this day The Servant of God, Luisa Piccarreta receives the last bond with Jesus in “the Marriage of the Cross” 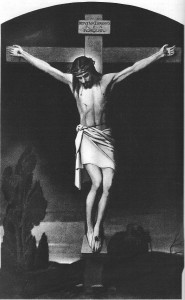 Feast Day of the Exaltation of the Holy Cross

The Servant of God Luisa Piccarreta, Little Daughter of the Divine Will, receives the last bond with Our Lord Jesus Christ:  the Marriage of the Cross

Book of Heaven
The Call of the Creature to the Order, the Place and the Purpose
for which He was Created by God
Volume One

One morning – it was the day of the Exaltation of the Cross – my sweet Jesus transported me to the holy sites; and first, He told me many things about the virtue of the cross. I don’t remember all, but just a few things: “My beloved, do you
want to be beautiful? The cross will give you the most beautiful features that
can possibly be found, both in Heaven and on earth; so much so, as to enamor
God, who contains all beauties within Himself.”

Jesus continued: “Do you want to be filled with immense riches – not for a short time, but for all eternity? Well then, the cross will administer to you all kinds of riches – from the tiniest cents, which are the little crosses, up to the greatest amounts, which are the heavier crosses. Yet, men are so greedy to earn a temporal penny, which they soon will have to leave, but do not give a thought to earning one eternal cent. And when I, having compassion for them, in seeing their carelessness for all that regards eternity, kindly offer them the
opportunity – instead of cherishing it, they get angry and offend Me. What
human madness – it seems that they understand it upside down. My beloved (Luisa), in the cross are all the triumphs, all the victories, and the greatest gains. You must have no aim other than the cross, and it will be enough for you, in everything. Today I want to make you content; that cross which until now has not been enough to lay you on and crucify you completely, is the cross that you have carried up to now. But since I have to crucify you completely, you need new crosses which I will let descend upon you. So, the cross you have had until now, I will bring to Heaven, to show it to the whole celestial court as pledge
of your love, and I will make another one descend from Heaven – a larger one,
to be able to satisfy the ardent desires I have upon you.”

While Jesus was saying this, that cross which I had seen the other times made itself present before me. I took it and I laid myself on it. As I was in this way, the
Heavens opened and Saint John the Evangelist came down, carrying the cross that Jesus had indicated to me. The Queen Mother and many Angels, when they arrived near me, lifted me from that cross and placed me over the one which they had brought me, which was much larger. Then, an Angel took the cross I had before and took it to Heaven with him. After this, with His own hand, Jesus began to nail me to that cross; Queen Mama assisted me, while the Angels and Saint John were handing the nails. My sweet Jesus showed such contentment, such joy in crucifying me, that just to be able to give that contentment to Jesus, I would
have suffered not only the cross, but yet more pains. Ah! it seemed to me that
Heaven was making new feast for me, in seeing the contentment of Jesus. Many
souls were freed from Purgatory and took flight toward Heaven, and quite a few
sinners were converted, because my Divine Spouse let everyone participate in
the good of my sufferings. Who can tell, then, the intense pains I felt while
being stretched so well over the cross, and pierced through by the nails in my
hands and feet? But especially the feet – the atrocity of the pains was such
that they cannot be described. When they finished crucifying me and I felt I
was swimming in the sea of pains and sufferings, Queen Mama said to Jesus:
“My Son, today is a day of grace – I want You to let her share in all of
Your pains. There is nothing left but to pierce her heart through with the
lance, and to renew for her the crown of thorns.” So, Jesus Himself took
the lance and pierced my heart through; the Angels took a crown of thorns, well
thickened, and handed it to the Most Holy Virgin – and She Herself drove it
into my head.

What a memorable day that was for me – of sufferings, yes, but of contentments; of unspeakable pains, but also of joy. It is enough to say that the intensity of
the pains was such, that for that entire day Jesus did not move from my side,
but remained close to me in order to sustain my nature, which was failing at
the liveliness of the pains. Those souls from Purgatory who had flown up to
Heaven, descended together with the Angels and surrounded my bed, cheering me with their canticles, and thanking me affectionately because through my
sufferings I had freed them from those pains.

It happened, then, that after five or six days of those intense pains, to my great
regret, they began to diminish, and so I would solicit my beloved Jesus to
renew the crucifixion. And He, sometimes quickly, and sometimes with some
delay, would be pleased to transport me to the holy sites and to let me share
in the pains of His Sorrowful Passion… now the crown of thorns, now the
scourging, now the carrying of the cross to Calvary, now the crucifixion –
sometimes one mystery per day, and sometimes everything in one day, as He
pleased. This would be of highest pain and contentment for my soul. But it
would become very bitter for me when the scene would change, and instead of I
being the one who suffered, I would be the spectator, watching most loving
Jesus suffer the pains of His Sorrowful Passion. Ah! how many times I found
myself in the midst of the Jews together with Queen Mama, seeing my beloved
Jesus suffer. Ah! yes, it is indeed true that it is easier for one to suffer
himself, than to see the beloved suffer.

Other times, I remember that, in renewing these crucifixions, my sweet Jesus would say to me: “My beloved (Luisa), the cross allows one to distinguish the reprobates from the predestined. Just as on the day of judgment, the good will rejoice upon seeing the cross, so even now it can be seen whether one will be saved or lost. If, as the cross presents itself to the soul, she embraces it, carries it with resignation and patience, kissing and thanking that hand which is sending it – here is the sign that she is saved. If, on the contrary, as the cross is presented to her, she gets irritated, despises it, and even reaches the point of offending Me – you can say that that’s a sign that the soul is heading on the way to hell. So will the reprobates do on the day of judgment: upon seeing the cross, they will grieve and curse. The cross tells everything; the cross is a book that, without deception and in clear notes, tells you and allows you to distinguish the saint from the sinner, the perfect from the imperfect, the fervent from the lukewarm. The cross communicates such light to the soul that, even now, it allows one to distinguish not only the good from the evil, but also those who are to be more or less glorious in Heaven – those who are to occupy a higher or a lower place. All other virtues remain humble and reverent before the virtue of the cross, and grafting themselves to it, they receive greater glory and splendor.”

Who can tell what flames of ardent desires this speaking of Jesus would cast into
my heart? I felt devoured by hunger for suffering, and in order to satisfy my
yearnings – or rather, to say it better, in order to satisfy that which He
Himself infused in me – He would renew the crucifixion.

I remember that sometimes, after renewing these crucifixions, He would say to me:
“Beloved of My Heart (Luisa), I ardently desire not only to crucify your soul and to communicate the pains of the cross to your body, but also to mark your body with the mark of my wounds; and I want to teach you the prayer in order to obtain this grace. This is the prayer: ‘I present myself before the supreme throne of God, bathed in the Blood of Jesus Christ, praying Him, by the merit of His most luminous virtues and of His Divinity, to concede to me the grace of being crucified’.”

However, I (Luisa) have always had an aversion for anything that might appear externally – and I still do – but in the act in which Jesus was saying that, I would feel such yearnings being infused in me to satisfy the desire that He Himself was expressing, that I would yet dare to ask Jesus to crucify me in the soul and in the body. And sometimes I would say to Him: “Holy Spouse, I would rather not have external things; and if sometimes I dare to ask for that, it is because You Yourself tell me to, and also to give a sign to the confessor that
it is You who operates in me. But for the rest, I would like nothing but those
pains which You make me suffer when You renew the crucifixion. If only they
were permanent – I would rather not have that diminution after some time. This
alone is enough for me. As for the outward appearance, the more You (Jesus) can keep me (Luisa) hidden, the more You will make me content.’ 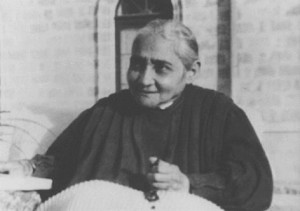 The Servant of God Luisa Piccarreta, Little Daughter of the Divine Will outside
at the St. Anthony Orphanage in Corato, Italy.
Normally invisable, the stigmata Luisa received can be seen
in her hand holding the Holy Rosary,
it looks like a line.