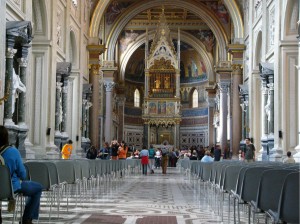 The pavement of the basilica dates from Martin V and the return of the popes to Rome from Avignon. Martin V was of the Colonna family, and the columns are their badge. The high altar, which formerly occupied the position customary in all ancient basilicas, in the centre of the chord of the apse, has now beyond it, owing to the successive enlargements of the church, the whole of the transverse nave and of the new choir. It has no saint buried beneath it, since it was not, as were almost all the other great churches of Rome, erected over the tomb of a martyr. It stands alone among all the altars of the Catholic world in being of wood and not of stone, and enclosing no relics of any kind. The reason for this peculiarity is that it is itself a relic of a most interesting kind, being the actual wooden altar upon which St. Peter is believed to have celebrated Mass during his residence in Rome. It was carefully preserved through all the years of persecution, and was brought by Constantine and Sylvester from St. Pudentiana’s, where it had been kept till then, to become the principal altar of the cathedral church of Rome. It is now, of course, enclosed in a larger altar of stone and cased with marble, but the original wood can still be seen. A small portion was left at St. Pudentiana’s in memory of its long connection with that church, and is still preserved there. Above the High Altar is the canopy or baldacchino already mentioned, a Gothic structure resting on four marble columns, and decorated with paintings by Barna of Siena. In the upper part of the baldacchino are preserved the heads of the Apostles Peter and Paul, the great treasure of the basilica, which until this shrine was prepared to receive them had always been kept in the “Sancta Sanctorum”, the private chapel of the Lateran Palace adjoining. Behind the apse there formerly extended the “Leonine” portico; it is not known which pontiff gave it this name. At the entrance there was an inscription commemorating the dream of Innocent III, when he saw the church of the Lateran upheld by St. Francis of Assisi. On the opposite wall was hung the tabula magna, or catalogue of all the relics of the basilica, and also of the different chapels and the indulgences attached to them respectively. It is now in the archives of the basilica.