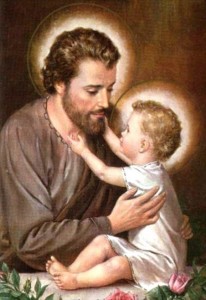 From the Official Website for the Servant of God Luisa Piccarreta:

The  name Joseph, in Hebrew, means “God will add”. Extensively we can say “he is added in the family”. He is in fact the “silent” protagonist that is “added” in the history of salvation. The canonical Gospels devoted to this figure a little space but his presence in the house of Nazareth is very important, it is a model for all fathers in children’s education and “care”.

Joseph took on the role of guardian of the family, in his silence that allowed him to listen to the voice of God. He was chosen by God Himself to be the guardian of his beloved Son, and he directed his own life on the trace of a few dreams, in which the angels carried the messages of the Lord, “Joseph, Son of David, do not fear to take Mary your wife, for that which is conceived in her is of the Holy Spirit “(Mt 1:20).

The Gospel of Matthew tells us that Joseph was a righteous man. According to Scripture being righteous is tantamount to behaving according to the commandments, according to the will of God, in the faithful observance of God’s Word. Joseph experienced all this and goes further: he changed justice into mercywhen he came to know that Mary was pregnant with a child who was not his, between the anguish of the suspected betrayal and the idea of repudiating her in secret, to save her from a cruel law that would lead her certainly to be stoned with the child in her lap.

Through his complete self-sacrifice, Joseph expressed his generous love for the Mother of God, and gave her a husband’s “gift of self” (Redemptoris Custos-Pope John Paul II).

He also decided to step aside, but a beautiful dream dissipated all his fears and lead him, with a total act of faith in God, to welcome the mystery that surrounded Mary, and from which he wasn’t excluded, so that the prophecies could be fulfilled, preparing himself to accept God’s plan with his constant presence beside Jesus to “assist” him, along with his wife, Mary in his growth “and Jesus increased in wisdom and in stature and in favor with God and man” (Lk 2: 51-52).

Joseph, like Mary, was of the royal line of David, but life forced him to make the artisan of the country, to get busy in the accurate processing of wood. He transferred that art to his son Jesus making with him humble furniture and household objects for poor homes in the Galilee , all built on the ability of those rough and calloused hands.

Joseph was the chaste husband of Mary, he was an loving father for Jesus, he was a responsible householder. Because of his deep humility before God and man and his care with which he sacrificed himself for the two sublime creatures that the Lord entrusted to him he was made worthy to participate in the mystery that is hidden in the house of Nazareth behind a modest life, seemingly normal, not worthy of visible attention.

In Jesus upbringing, he shared with Mary sorrows and joys: the sorrow of not having conceived  him and the joy of being able to clasp  him in his arms and to educate him as his own; the sorrow of seeing him to be born in poverty and  the joy of seeing that he was adored by the angels; the sorrow of Simeon’s prophecy announcing the destruction and the joy of salvation of souls; Finally, the sorrow of not seeing his son recognized and glorified publicly because death occurred, and the joy of dying peacefully in His arms, he was the only earthly creature who died with Jesus in the flesh and blood, at his side. Indeed St. Joseph is acclaimed as the patron of a happy death.

Through Luisa, Jesus teaches us to make the model of our lives and our families on the house of Nazareth so, at every moment of the day, if we work, if we pray, if we take food, we must give one hand to our Mama, the other to Jesus, and our  gaze to Saint Joseph.

But what is behind the house of Nazareth?

In the house of Nazareth everything was love and Divine Will, the Virgin Mary possessed the Divine Fiat since her conception, Jesus was the Divine Will Itself and St. Joseph, a man like us, between Jesus and Mary – how could he not let himself be dominated by this Most Holy Will?

Saint Joseph lived in the reflections of what Jesus is by nature and Mary by grace.

In the house of Nazareth, in his hidden life, Jesus had the Kingdom of the Divine Will, and as He Himself referred to Luisa, while He was the King, Her mother was the Queen, Joseph was the prime minister of a kingdom not yet present on the earth but that over the centuries it woul reach its fulfillment.

As for Luisa, the presence of St. Joseph in her life had a specific value: she compared the constant care that the priest had for her  with  the care and the office that St. Joseph (and Mary) had for Jesus. His reward would be great because Jesus who had his life in Luisa, would consider the assistance and sacrifices of the priest as though St. Joseph and Mary were doing them again for Him.

Joseph was the man of  Faith, Charity and patience. He was devoted to his work, he had feeling of caring towards his family and neighbor, making any sacrifice.

Contrary to what we might think, Joseph was the man who knew how to make his choice: he believed in Jesus and did His teaching his reason for living, because he got down to work immediately, despite the difficulties, to fully took on his office of the guardian and with Mary gave life to the first early Church, to the first Christian community. As Pope Francis reminded us: “Families are the domestic Church, where Jesus grows; he grows in the love of spouses, he grows in the lives of children. “. Now more than ever families need to recover their strengthening through the union with the Divine Will.

Those fathers and those mothers who sacrifice their lives for their children, educating them in love and obedience for love to the divine will receive a great reward. Won’t they?.

“Saint Joseph, you will be my protector, the guardian of my heart, and will keep the keys of my will in your hands. You will keep my heart jealously and shall never give it to me again, that I may be sure of never leaving the Will of God.”. Amen! (Luisa Piccarreta)