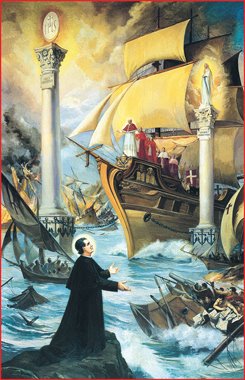 Click here or here for more on Dream of St. John Bosco

John Bosco was an Italian priest, who from childhood onward had vivid and mystical dreams which helped him in directing his life and which described in great detail conditions and events that would occur in the future. He persistently astounded those around him with the accuracy and precision of the prophecies he made that came to pass during his lifetime. He was also a miracle worker, healing thousands, and he was the founder of the Salesian Order. He and his followers helped tens of thousands of street children in Italy and in the Western Hemisphere develop job skills and a moral and spiritual life. He died in 1888.

Book of Heaven
The Call of the Creature to the Order, the Place and the Purpose
for which He was Created by God
Volume 3; November 1, 1899

Purification of the Church.  Her support:  the victim souls.

As I was in my usual state, I found myself outside of myself, inside a church, in which there was a priest celebrating the Divine Sacrifice, and while doing this, he was crying bitterly and said:  “The pillar of My (God’s) Church has no place to lean!”

In the act in which He was saying this, I (Luisa) saw a pillar; its top touched the heavens, and at the bottom of this pillar there were priests, bishops, cardinals and all other dignities, sustaining this pillar.  But to my surprise, I went about looking and I saw that of these people, some were very weak, some half rotten, some infirm, some full of mud.  So very scarce was the number of those who were in a condition to sustain it.  So, this poor pillar kept swaying, unable to remain still, so many were the quakes it received from the bottom.  At the top of this pillar there was the Holy Father who, with gold chains and with rays emanating from his whole person, did as much as he could to sustain it, and to chain and illuminate the people who dwelled at the bottom, although some of them would flee so as to be more comfortable in becoming rotten and covered with mud; and not only this, but he did as much as he could to bind and to illuminate the whole world.

While I was seeing this, that priest who was celebrating Mass (I am not sure whether he was a priest or Our Lord; it seems to me it was Him, but I cannot tell with certainty) called me close to Himself and told me:  “My daughter (Luisa), see in what a heartrending state My (God’s) Church is.  The very ones who were supposed to sustain Her withdraw, and with their works they knock Her down, they beat Her, and reach the point of denigrating Her.  The only remedy is that I (God)  so much blood to be shed as to form a bath to wash away that rotten mud and to heal their deep wounds, so that, healed, strengthened and embellished in that blood, they may become instruments capable of keeping Her stable and firm.”

Then He (Jesus) added:  “I (God) have called you (Luisa) to tell you (Luisa):  ‘Do you (Luisa) want to be victim, and therefore be like a prop to sustain this pillar in these times so incorrigible?’”

At first I felt a shiver run through me for fear that I might not have the strength, but then immediately I offered myself and I pronounced the Fiat.  At that moment, I found myself surrounded by many Saints, Angels and purging souls, who tormented me with scourges and other instruments.  At first I felt a certain fear, but then, the more I suffered, the more I wanted to suffer, and I enjoyed the suffering like a most sweet nectar; more so, since a thought touched me:  ‘Who knows whether those pains might be the means to consume my life, so that I might take wing in the last flight toward my highest and only Good?’  But to my highest sorrow, after suffering bitter pains, I saw that those pains would not consume my life.  Oh God, what pain! – that this fragile flesh prevents me from uniting myself to my Eternal Good!

After this, I (Luisa) saw the bloody slaughter that was made of the people who were at the bottom of the pillar.  What a horrible catastrophe!  So very scarce was the number of those who would not be victims; they reached such daringness as to try to kill the Holy Father.  But then, it seemed to me that that blood which was shed and those bloody tormented victims were the means to render those who remained strong, so as to sustain the pillar without letting it sway any more.  Oh, what happy days!  After this, days of triumphs and of peace would arise; the face of the earth seemed to be renewed, and the pillar would acquire its original prestige and splendor.  Oh, happy days! – I (Luisa) hail you from afar, days which will give great glory to my Church, and great honor to the God who is Her Head!