We owe to the Holy Apostles the priceless treasure of the Christian faith.  They handed Chris’s teachings down to us.  From them, we recede the Holy Gospel and the letters of the Apostles.  They laid a firm foundation for the Church of Christ.

Both Apostles St. Peter and St. Paul are distinguished for this character, their zealous apostolic labors and their great cult in the Holy Church.

The Basilica of St. Peter on the Vatican and that of St. Paul outside the Walls were consecrated by St. Slyvester on November 18th.

The Basilica of St. Peter’s was completely rebuilt in the 16th century when it was falling into decay.  Julius II and Leo X had recourse to the greatest artists of the age, Bramante and Michael Angelo.  Urban VIII consecrated this church, the vastest and richest in the world, on November 18, 1626.

The Basilica of St. Paul, on the Ostian Way, was nearly completely destroyed by fire in 1823.  The church was rebuilt with unheard of magnificence by Gregory XVI and Pius IX, and consecrated by the latter on December 10, 1854, two days after the proclamation of the dogma of the Immaculate Conception. 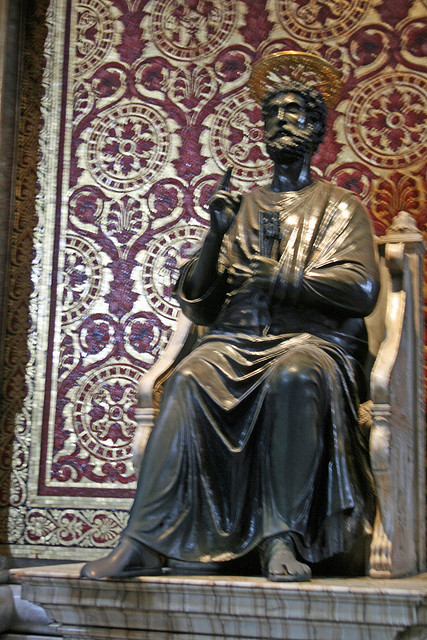 St. Peter’s stature located at St. Peter’s in Rome
(Note St. Peter’s right foot is warn down from all the years of pilgrim veneration)

Our Lord Jesus Christ, having great plans for St. Peter at the beginning of his calling, changed the name Simon to the symbolic name of Peter-Cephas, which means rock, for he was to be the rock that will form the foundation of His Church.  St. Peter was closely associated with Christ during His public life:  He witnessed the glory of Christ on Mt. Tabor; in the name of all the Apostles, he professed the Divinity of Christ; he was sent with St. John to prepare the Paschal Supper; He witnessed Christ’s agony in the Garden of Olives; the temple tax was paid by Christ for Himself and for Peter.

After the Ascension of Christ, St. Peter became the head of the Apostles and the leader of the first Christian community in Jerusalem.  Under his leadership, a new Apostle was elected to take the place of Judas.   Peter convoked the first church Council in Jerusalem.   St. John Chrysostom calls Peter “the firstborn lamb from the flock of the Good Sheperd.”

The love of Christ was the chief motive of St. Peter’s apostolic activity, labors and sacrifices.  That love finally led him to suffer and die for the sake of his beloved Teacher.  A pious tradition relates that he considered himself unworthy to die on the cross as Christ did, and therefore asked to be crucified upside down.  This tradition is confirmed by Bishop Eusebius (+340) in his History of the Church, and by St. John Chrysostom in a sermon on the Apostles SS. Peter and Paul, in which he says:  “Rejoice, Peter, who dies on the cross head downward.”  St. Peter died in Rome during the reign of Emperor Nero (54-58), between the years of 64-67 A.D. 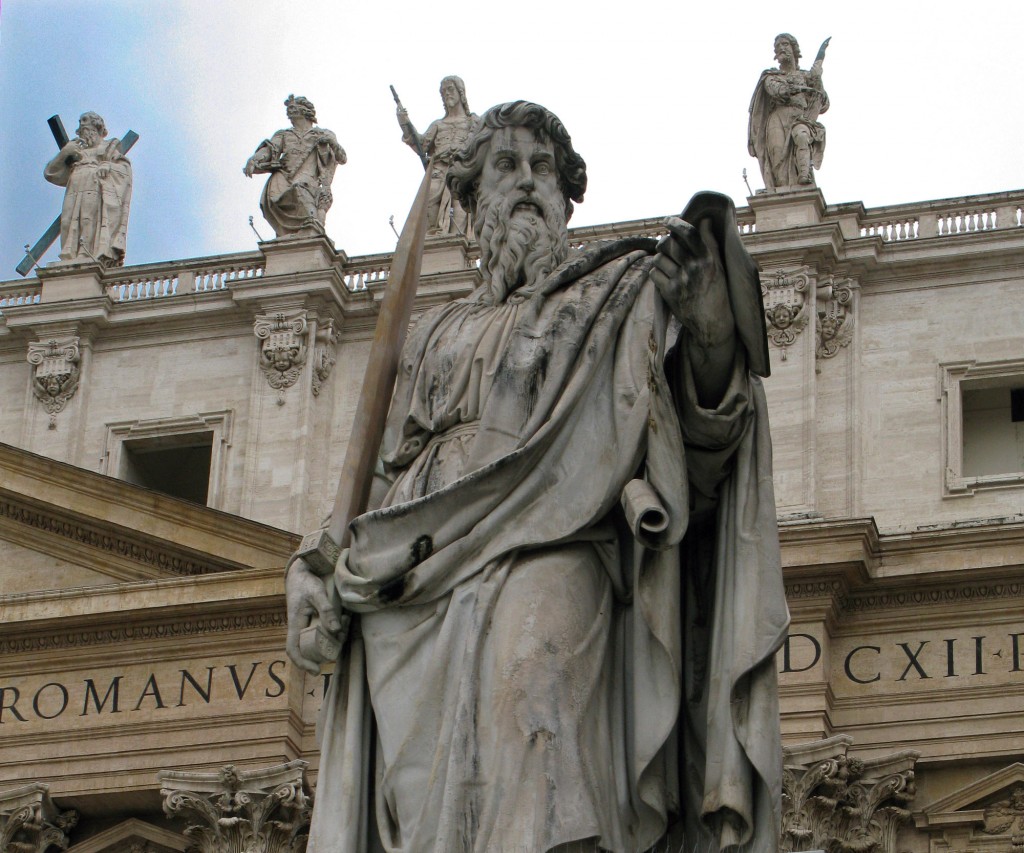 Statue of Saint Paul
by Giuseppe De Fabris 1840
in front of the St. Peters Basilica

St. Paul did not belong to the original group of the twelve apostles, but through his apostolic labors, his dedication, his superhuman sacrifices, and his sufferings in the service of Christ, he receive the title, along with Peter, of the First Apostle.  He is the only one of the Apostles who was highly educated and was by birth a Roman citizen.  While Paul was on his way to Damascus, Christ Himself converted him in a miraculous manner and called him to be an Apostle.  After his conversion from being a persecutor of Christians, he became, in heart and soul, a zealous and courageous apostle of Christ.

“Paul was a wolf,” says St. Chrysostom, “But he became a lamb.  He was a thorn, but he became a fruitful vine.  From an enemy, he became a friend; from a weed, he became wholesome bread . . . The blasphemer became a theologian; the persecutor, a herald of good news; the tormentor – a leader; the traitor – a fellow-champioin.”  (On the Holy Twelve Apostles)

In his apostolic work, St. Paul distinguished himself as a man of uncompromising character, remarkable strength of will and fervent spirit.  For many years, he fearlessly preached the Gospel of Jesus Christ day and night.  His unlimited love for Christ knew no obstacle, recognized no difficulties, and placed no limit to sacrifice.  His love impelled him to undertake great missionary journeys and to establish new Churches; he was always ready to suffer and die for Christ.

The apostle of the Gentiles was not only an excellent preacher and a good organizer, but also an eminent theologian and writer.  From him we have fourteen letters addressed to various Churches or persons in which he clearly expounds the teachings of Christ.  St. Paul gave up his life for Christ in 65 or 67 A.D.