See original at the Tree of Life Website, click here.
I’ve always thought the miraculous image of Our Lady of
Guadalupe was packed with astronomical information.
We know the tilma contains the constellations as they
appeared over Mexico on December 12, 1531, but I always
thought there was more to it.

The crescent on the bottom of the image was interesting,
but I never could quite relate it astronomically to the blazing
sun she was positioned in front of.

And was she standing ‘on the moon?’

Well, if she was, her feet would literally have to be positioned
above her ankles and her legs wouldn’t be in proportion to
the rest of her body. No. Upon further inspection it was quite
apparent – she is standing on the shoulders of the angel
and the crescent-shaped horn is in front of her ankles.
More on this in a bit…

While reading about the transit of Venus (the mother planet),
I noticed a few amazing details. A description of the
beginning of the transit reads as follows:

‘Just before interior contact at ingress the sun will show two
fine sharp horns of light, gradually approaching each other to
meet around the dark body of the planet (Venus). These horns
of light don’t meet instantly. Very generally there will be a
period of several seconds during which the light will glimmer
and disappear by turns.’ In other words, at the very beginning of the transit the Sun
will make 2  ‘fine, sharp horns’ under the lower portion of
Venus (the mother planet). Doesn’t this image bring to mind
the ‘horns’ or sharp crescent under the feet of Mexico’s Our
Lady of Guadalupe? As if that ‘horn’ image isn’t enough, this
will also take place between the horns of the constellation
‘The Bull.’ This convinced me even more about the possibility
of horns being symbolized in the Mexican image.
Next you can see a graphic of the horns of ‘The Bull’ while
the Venus transit is just beginning. There’s even a little
slice out of the top of the Sun: 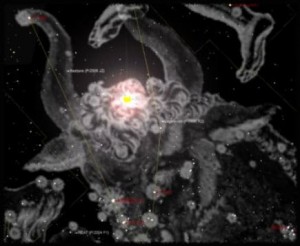 Our Lady of Guadalupe’s tilma is all about astronomy;
the stars, the corresponding constellations, the Sun, the
crescent horn-shaped symbol by her feet. It always
bothered me that she wasn’t standing on the crescent.
Surely, if it was the moon, she wouldn’t be standing behind it.
The angel is even lifting a portion of her mantle, almost
drawing attention to the fact that she isn’t standing on the
sharp crescent shaped horn(s). Although I do believe the
supposed Moon image actually may be more symbolic of
horns, there is no doubt this crescent could very well be a
reference to Islam at some point in the future.

Added note: I just came across a site by a priest who is
an astronomer. He mentioned that the angel below Our Lady
is located astronomically in the constellation Orion on the
tilma. Orion represents the hunter. The hunter is pointing his
bow at the constellation Taurus, the bull with the two horns.
“There you have a battle between the warrior, or St. Michael, and the beast.”

* I’ll link to that article at the end of this page.
Well, guess what? The constellation Orion is positioned
directly below the transit. You can see him with his left
arm raised below the horns of the bull. The transit is
taking place between the two horns. If you look to the
right you can see Aries, the lamb. The king planet, Jupiter,
is almost even with the transit, between the lamb and
the horns of ‘The Bull.’ 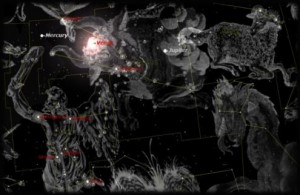 The next transit of Venus over the Sun is on December 11,
2117. Guess what the next day is;  The Feast of Our Lady
of Guadalupe! I don’t think this will matter much then, but
again, I think it’s pointing us to a connection now.

It’s been 480 years since the image was miraculously
imprinted on Juan Diego’s tilma. 480 years is also mentioned
in Scripture:

And it came to pass in the four hundred and eightieth
year after the children of Israel came out of the land of
Egypt, in the fourth year of the reign of Solomon over
Israel, in the month Zio (the same is the second month),
he began to build a house to the Lord. And the house,
which king Solomon built to the Lord, was threescore
cubits in length, and twenty cubits in breadth, and thirty
cubits in height.

i mentioned a while back how powerful the number twelve
seems to be when it comes to Scripture or fighting evil.
12 apostles, 12 tribes, 12 months of the year, etc…
Scripturally, 12 symbolizes perfection so I’ve been expecting
big things in this year of Our Lord, 2012.

Lastly, as noted before, this transit will be completely visible
from Hawaii to Indonesia. The transit ends in Hawaii at sunset
while ending in Kenya at sunrise. This seems like potent
symbolism too (if ya know what I mean). Barry came from
Indonesia to Hawaii (not counting his birth in Kenya, of
course). This transit is in the exact reverse of that,
visibility-wise. Big deal? Maybe so, considering how Barry
has literally brought the Middle East to the brink of nuclear
war. And let’s not fail to point out his worldwide agenda
where American taxpayer monies are now funding abortions
on a global scale (he lifted the Mexico City Policy after about
3 days in office). This horror alone is enough to bring us to a
very threatening time (Mother Teresa warned, ‘The fruit of
abortion is nuclear war’). Barry has set himself directly
against God, even engaging in blasphemy while now making
war on the Bride of Christ – the Roman Catholic Church.
Pretty big deal, I’d say…

The Feast of the Most Holy Body and Blood of Christ is on
the Sunday following the transit and 9 days after it will be the
Feast of the Sacred Heart of Jesus – the ONLY SON OF GOD
(not ‘a’ son of God as the faux president of the United States
recently stated). The next day is the Feast of the Immaculate
Heart of Mary.

It’s interesting to note that the Mother Planet, Venus,
and the King planet Jupiter will edge closer together for
the next month over the horns of the Bull. 40 days after the
transit marks the Feast of Our Lady of Mount Carmel.
During the Miracle of the Sun in Fatima the Blessed Mother
appeared as Our Lady of Mount Carmel (Hebrew translation
‘Har ha Karmell’ – means God’s vineyard). Mount Carmel is
in Northern Israel.

Lastly, two days following the Feast of Our Lady of Mount
Carmel will mark 182 years since the Blessed Mother first
appeared to St. Catherine Laboure.

From a previous commentary:

‘The first apparition occurred on July 18, 1830, at about
11:30PM. Catherine said the chapel was decorated as if it
was Christmas Eve.’

Hmmmm… I love Christmas! BTW, If you like commentaries on prophecy and astronomy the
Miraculous Medal commentary is one for you..  * Here’s a link * It’s no wonder some of the recent prophecies have been
telling us to look up. A star called Tau also is playing a
center stage role in this event. Here’s some amazing
Scripture regarding the ‘Tau.’ PS: How about joining me in a novena to the Sacred Heart of
Jesus and the Immaculate Heart of Mary beginning on the day
of the transit? ** Father Anthony’s article on the tilma and it’s constellations…
6.3.2012 @11:34PM EDT

2020 Hours of the Passion Schedule 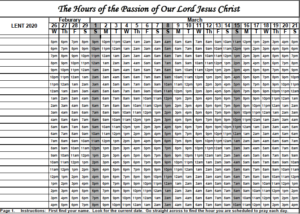 Special Protection from the Holy Family

24 Hours of the Passion 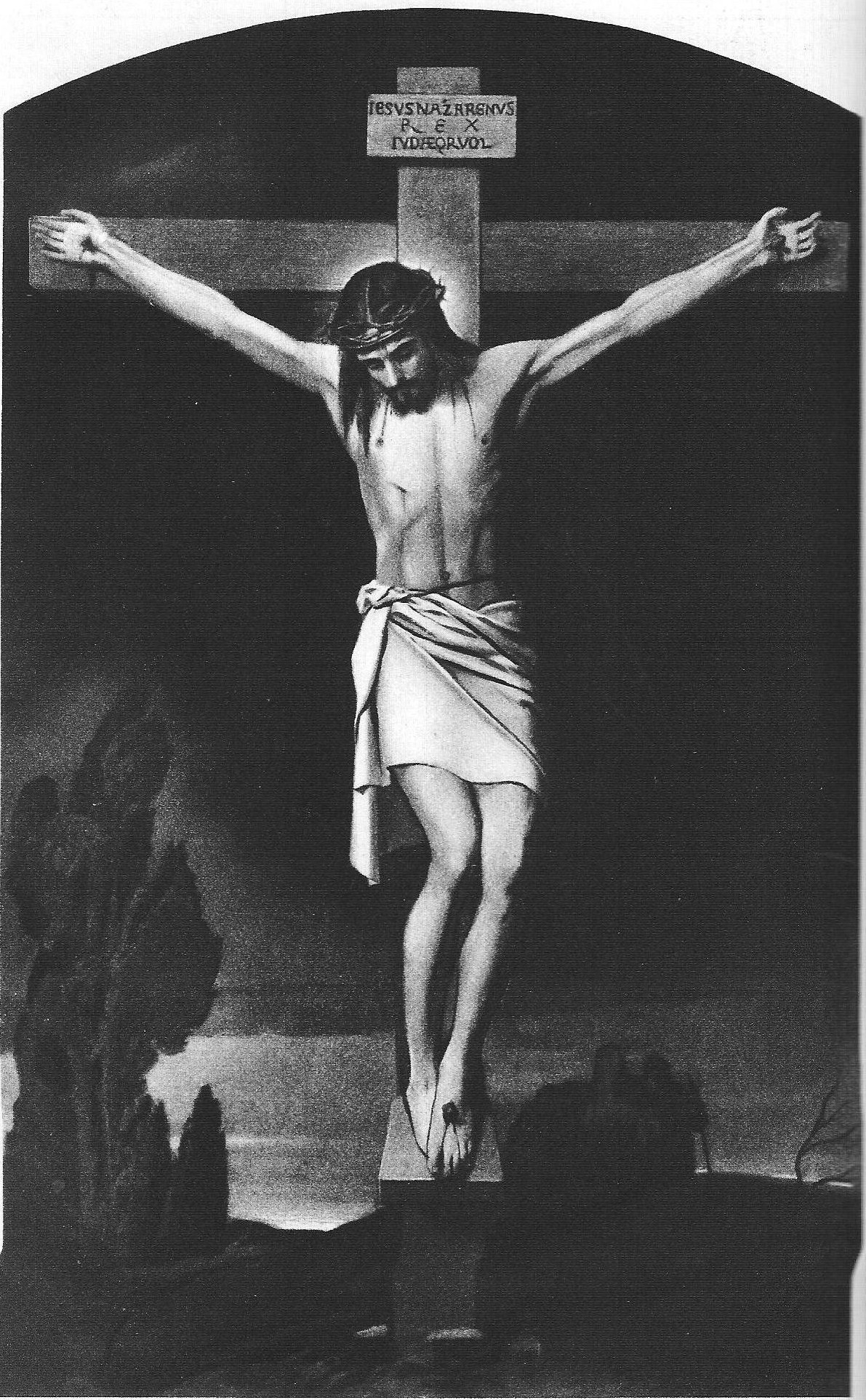 Stations of the Cross

Meditations for the Stations of the Cross

From the Writings of the Servant of God, Luisa Piccarreta

Daily Prayers for the Dying in the Divine Will

Participating in Seven Sorrows of Our Lady through Luisa

Combined Volumes 1-36 of Book of Heaven

Our Lady of Guadalupe

The Virgin Mary in the Kingdom of the Divine Will

THE SURPRISE OF LUISA!

Consecration of Home to Our Lady of Loreto 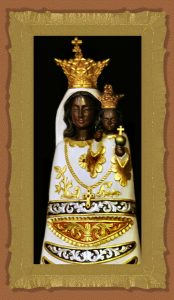 Our Lord Jesus Christ King of the Universe 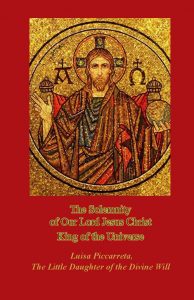 Adam and Luisa in the Kingdom of the Divine Will 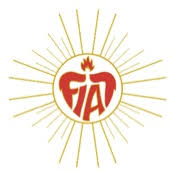 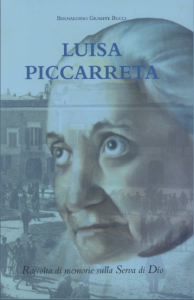 Prodigies of the Blessed Virgin Mary 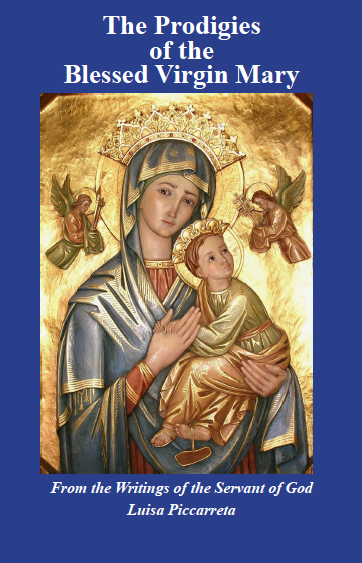 Dawn of a Mystery 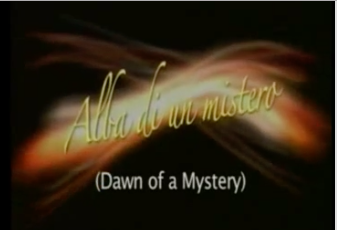 How to Pratice the Nine First Friday’s Devotion 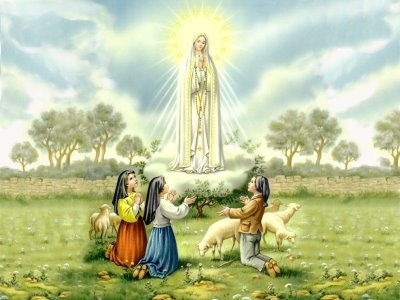 As we celebrate the 100th anniversary of Our Lady of Fatima many are still unaware of the message Our Lady gave to each of us.

Titles: The Importance of Knowing Who Luisa Is in the Eyes of Jesus 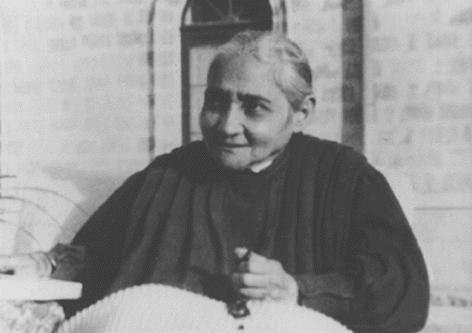 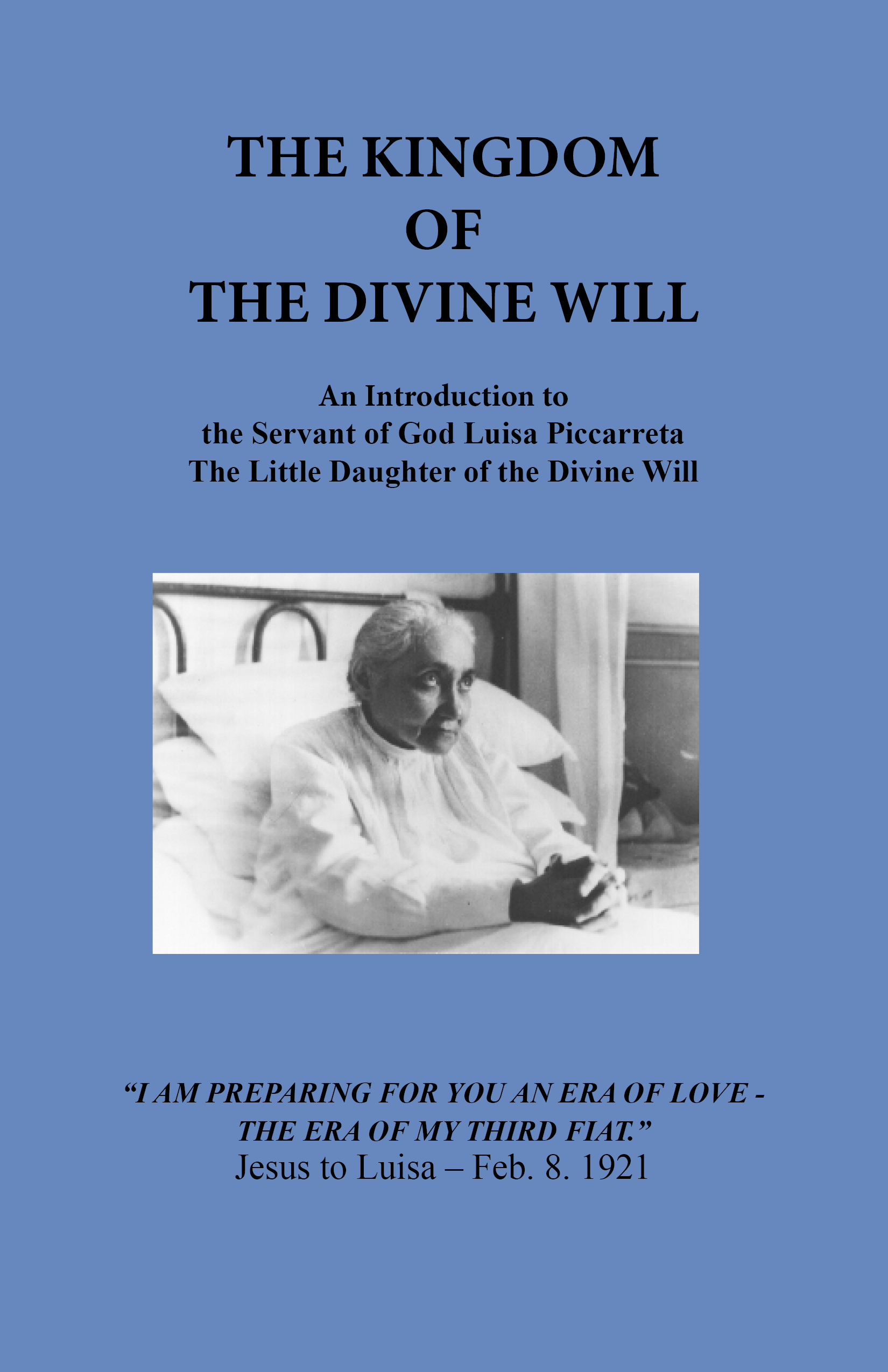 Echo the Prayers of Luisa 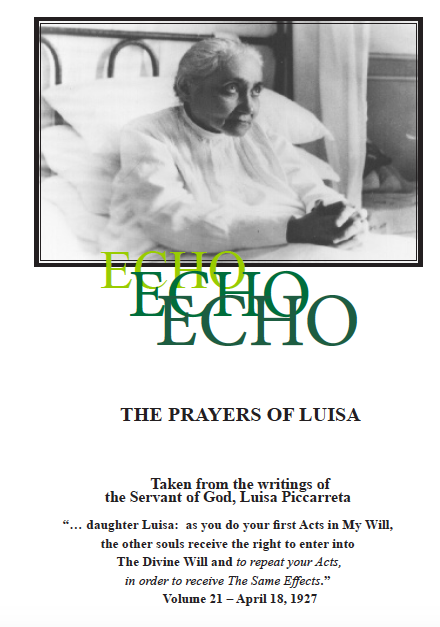 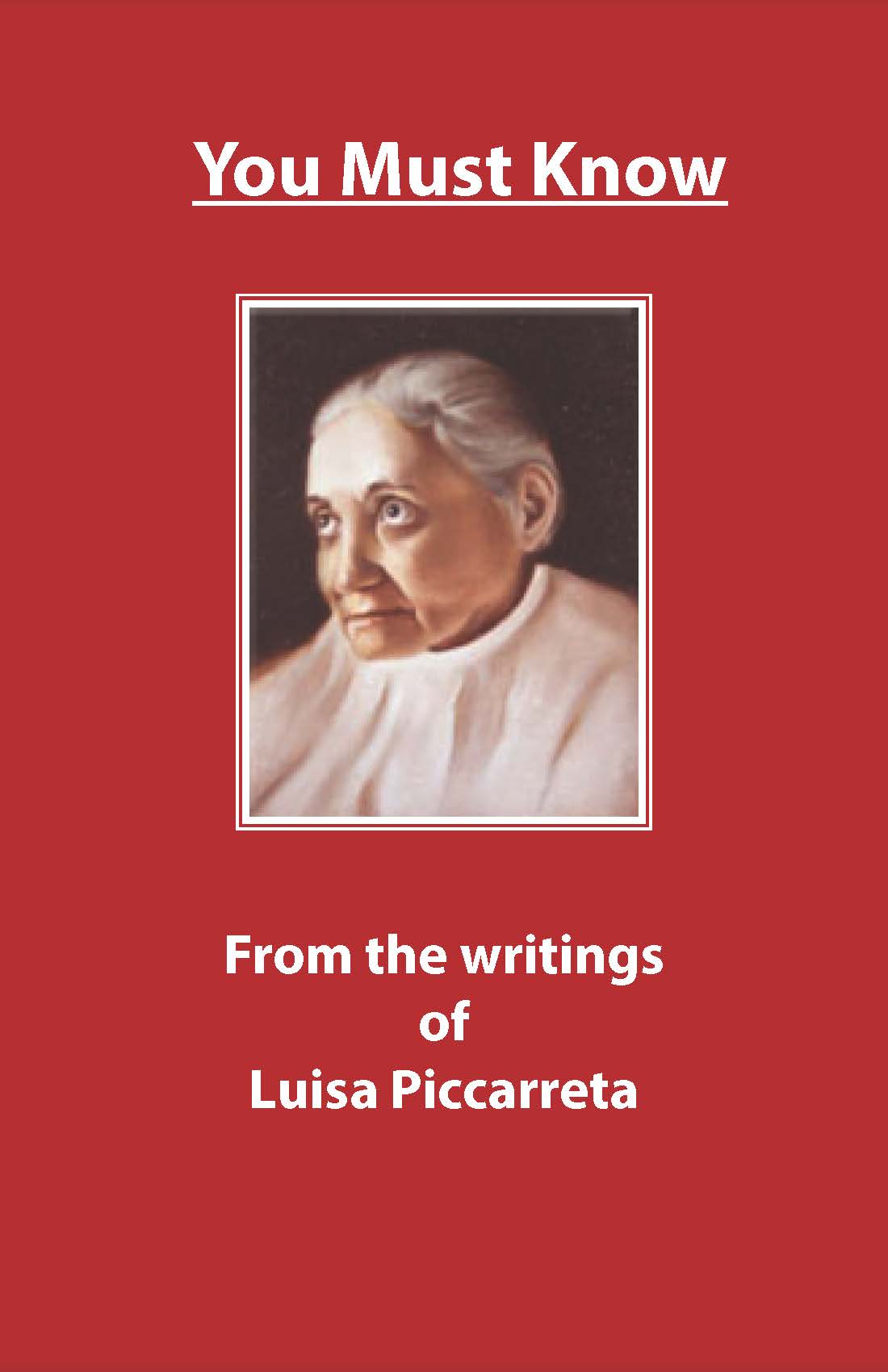 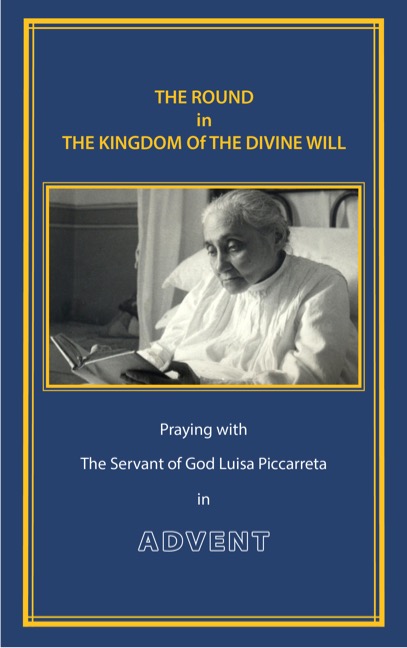 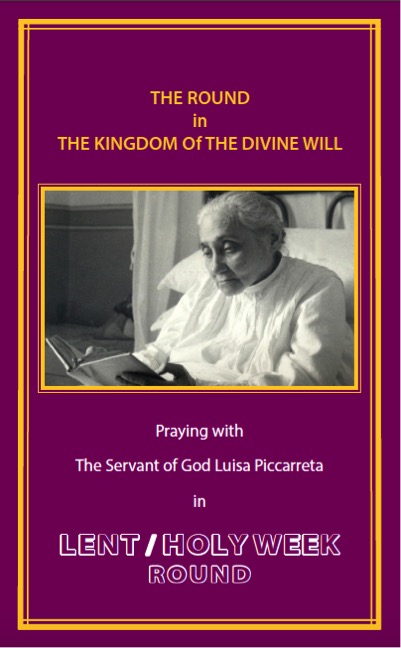 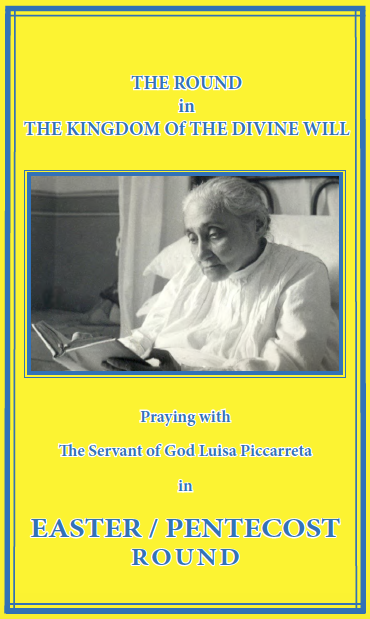 Prayer for the Glorification of the Servant of God Luisa Piccarreta 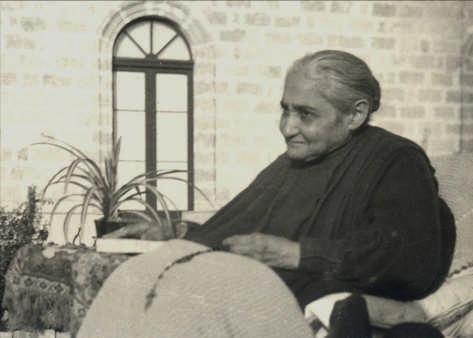 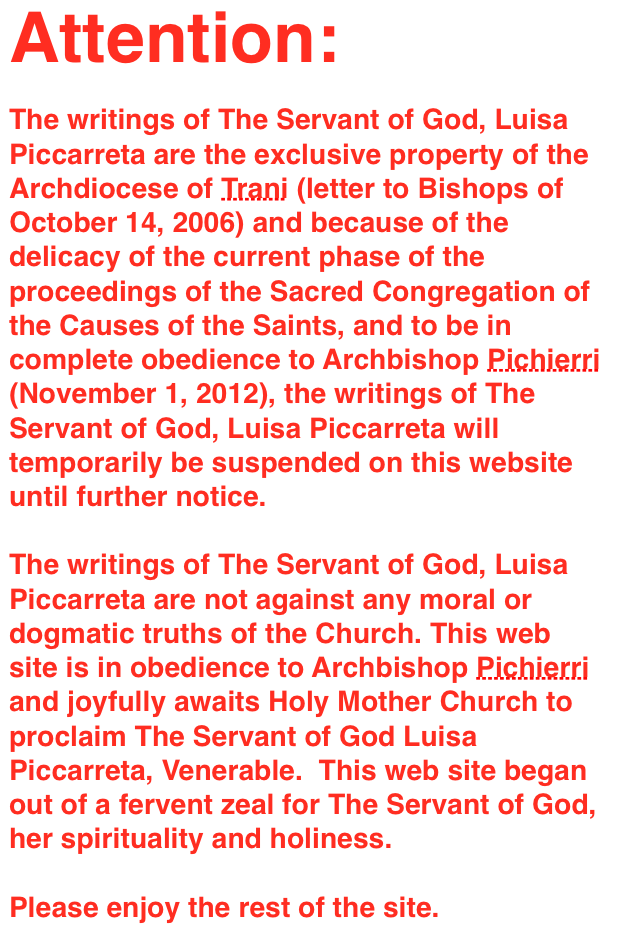 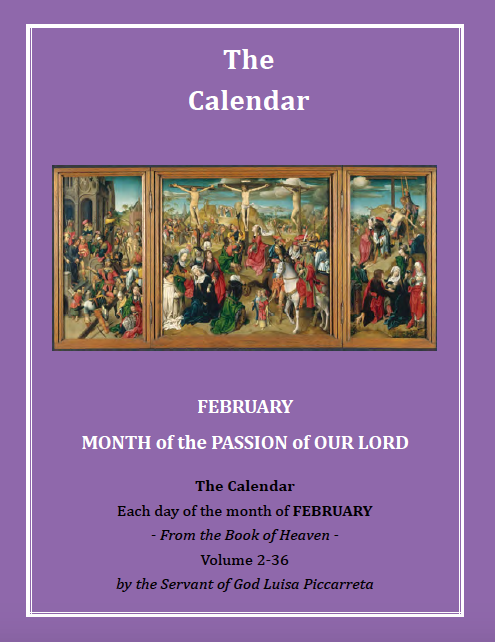 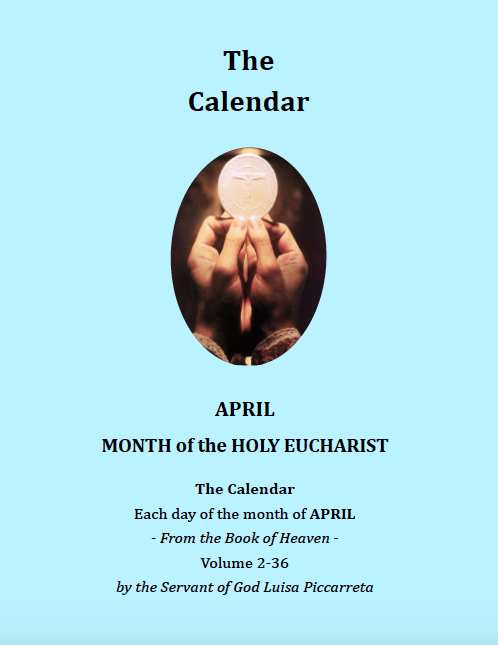 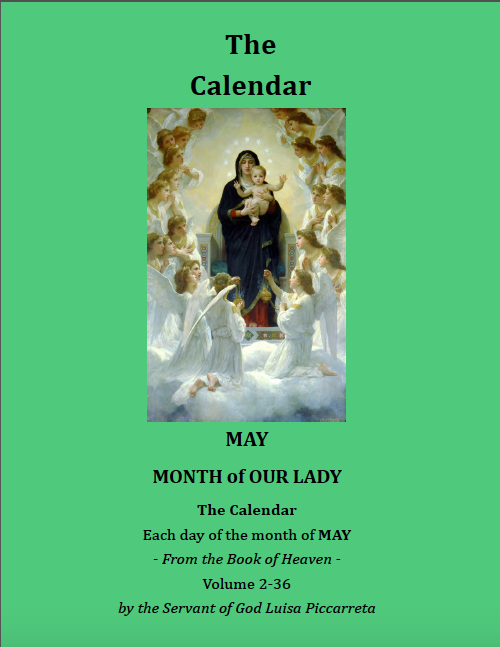 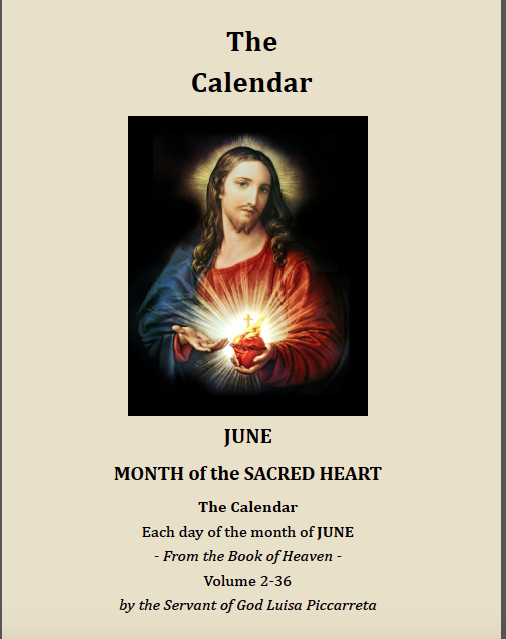 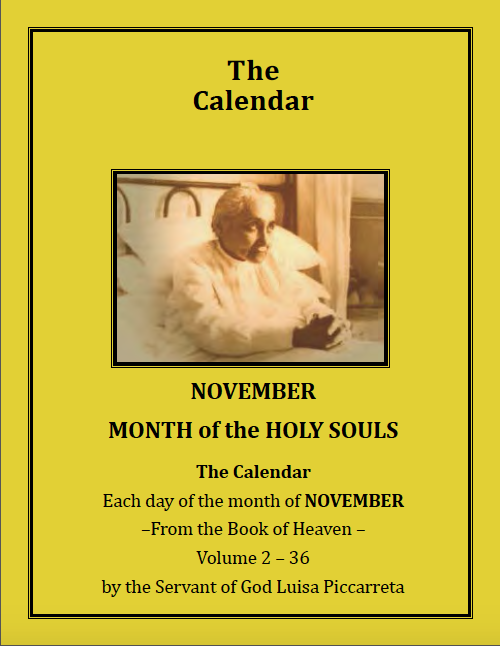 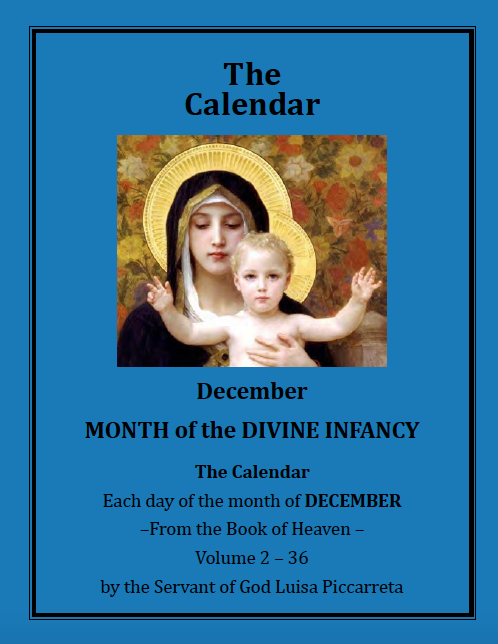